An overtime pay class action launched against an insurance claims administrator achieved preliminary approval earlier this month, when a non-revisionary cash settlement worth $2.5 million was given the nod by Los Angeles Superior Court Judge Carolyn B. Kuhl. The unpaid overtime lawsuit alleged that various policies observed by the defendant forced claims adjusters into situations where they had to work off the clock, foregoing overtime pay, meal and rest breaks. 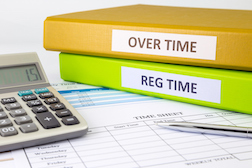 The case is Antoinette Salazar v. Sedgwick Claims Management Services Inc., Case No. BC556145, in the Superior Court of California for the County of Los Angeles.

The class comprises some 600 current and former employees of Sedgwick who worked for the firm as claims adjusters from August, 2010 to present day. Lead plaintiff Antoinette Salazar was herself employed as a claims adjuster at Sedgwick across a five-year period from April, 2007 until May, 2012. She claims in her California overtime law class action that Sedgwick maintains an overtime pre-approval policy as well as an alternative four-day workweek schedule that forces employees into a position where they have to work off the clock in order to meet work quotas established by Sedgwick.

“Sedgwick’s policy and corporate culture of restricting overtime, coupled with heavy caseloads imposed on class members, forced employees to work off the clock, outside of their recorded time,” the memorandum to the court in support of preliminary approval states. “Plaintiff and class members allege they only reported their scheduled hours, and not the hours actually worked. If plaintiff and class members reported unauthorized overtime, they faced disciplinary action, including termination.”

More CALIFORNIA OVERTIME News
Sedgwick countered that it duly provided for overtime and complied with California law by providing meal breaks and paying premiums for missed meals. The defendant provides insurance claims administration to major employers in the US, including workers’ compensation claims, disability, general, auto and professional liability coverage, according to Court documents.

Judge Kuhl was happy with almost all aspects of the preliminary settlement, with the only caveat that she suggested language that might give a class participant more time to either file an objection to the overtime pay laws class action – or opt out entirely – if a hiccup such as an address change might serve to delay notification.

As class representative, Salazar is to receive $6,000 in additional compensation.

Posted by
Melissa
on January 26, 2018
Its all the time spent denying poor peoples claims. They can afford OT from the LTD claims they refuse to pay