Farmworkers Another Step Toward California Overtime

Farmworkers employed by Apio Inc. fought for their rights and won last week, when a California overtime class-action lawsuit settled for almost $6 million. 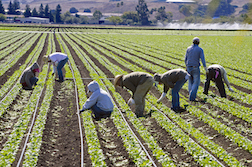 The lawsuit claimed that Apio, a Guadalupe packaging company, and Pacific Harvest, its labor contractor, failed to provide appropriate rest and meal times to workers, while also failing to pay minimum and overtime wages. Further, Apio failed to pay employees for their full shifts due to their supervisors electronically scanning in workers by barcode when they arrived at their workstations, and scanning them out when they walked from one station to another. As well, the plaintiffs said they had to clock out while they dressed in and undressed from protective gear, known as donning and doffing, which is a violation of
California Labor Laws. The workers’ attorney explained this practice succinctly: “If you do anything for the benefit of the employer, you must clock in first,” Hector Martinez told the Santa Barbara Independent. Agricultural workers have been fighting for more than overtime protection. They often work for less than minimum wage, even when this industry currently has more than a 25 percent labor shortage.

Meanwhile, labor activists with CAUSE, (Central Coast Alliance United for a Sustainable Economy) have been pushing for a Farmworker Bill of Rights to, “tackle the harsh labor conditions all too common for workers”, and help organize farmworker communities. According to CAUSE, one in three farmworkers in Santa Barbara County and 3 in 5 farmworkers in Ventura County said they’ve experienced at least one form of wage theft.

But California workers are faring better than those in other states: California is the first state in the country to give equal rights to overtime pay for farmworkers after 80 years of exclusion.  Implementing overtime pay, however, is keeping labor attorneys busy.

Apio has a history of worker abuse. Back in 2014, the Santa Maria Times reported that Apio workers lost benefits after signing a document they did not fully understand. It is convoluted: Apio subcontracts labor from various companies, including Pacific Harvest and Rancho Harvest. When Rancho Harvest workers signed the document, they became Pacific Harvest employees and many of them claim to have lost some of their health benefits. At the time, Apio said the problem was between the workers and the subcontractors. Since 2014, it has become Apio’s problem. This press release issued by Landec Corporation (March, 2017) explains how Apio, its food subsidiary, is responsible for wage and hour claims:

More CALIFORNIA OVERTIME News
“For over 15 years, Apio has retained Pacific Harvest, a contract labor provider, to manage all aspects of hourly labor requirements within its Guadalupe, California manufacturing facility, including recruiting, hiring, daily management, payroll processing and employee benefits administration. In August 2015, one month before the first lawsuit was filed against Apio and Pacific Harvest, the National Labor Relations Board (NLRB) held in the Browning-Ferris Industries decision that employees of a labor contractor may be considered to be de facto employees of the company who engaged the labor contractor. As a result, rather than being shielded from these type of lawsuits as in the past, Apio may now be considered a joint employer and therefore may be jointly liable with Pacific Harvest, even though the employees who filed the claims are employees of Pacific Harvest.”

The Apio class action lawsuit was first filed in September 2015, followed by another in May 2016. This $6 million settlement represents about 6,000 Apio employees.