A California overtime pay class action lawsuit will settle for $5.95 million following the granting of final approval by a California federal judge earlier this week. The settlement brings to a close a lawsuit brought by a class of service managers against Ecolab Inc., alleging violations against California overtime law. 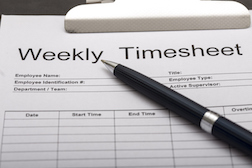 According to Court records the class maintained they were improperly classified as exempt from overtime, when in fact they were properly due overtime for work performed above 8 hours in any given day, and 40 hours in any given week. According to the terms of the settlement the class of 158 workers will each receive $442 per week of work. Additionally, five class representatives will receive an additional $5,000 with $15,000 going to the California Labor and Workforce Development Agency. A sum of $9,000 will go to the claims administrator, according to Court documents.

The unpaid overtime lawsuit was settled relatively quickly, unlike a related lawsuit from which Campos v. Ecolab stemmed. Ross v. Ecolab was settled for $35 million in March of last year, but took seven years of litigation to reach that point. In comparison, Campos v. Ecolab was filed in August of 2016 and went into mediation after three months. The final approval of the proposed $5.95 settlement came within a year of the filing.

Ross v. Ecolab made similar allegations of misclassification under California overtime law. To wit, workers hired to service dishwashers, together with employees undertaking promotion and marketing tasks for Ecolab’s cleaning products, claimed they were incorrectly classified as exempt from overtime pay in violation of overtime pay laws.

More CALIFORNIA OVERTIME News
The Campos case stemmed from Ross v. Ecolab, after plaintiff Juan Campos sought similar relief for route managers and service managers not covered by the Ross lawsuit and resulting settlement. Unlike Ross, however, the Campos case settled much more quickly, thanks in part to work already done in the Ross litigation. The association between the two lawsuits prompted the judge in Campos v. Ecolab, US District Judge Phyllis J. Hamilton, to dial back the legal fees given that much of the heavy lifting was done in Ross v. Ecolab by the same legal team, according to documents related to the case.

As for the Campos plaintiffs, Judge Hamilton characterized the end result in the unpaid overtime lawsuit as “a very good result for the class,” considering the presence of arbitration agreements that forbid class action lawsuits.

The case is Juan Campos v. Ecolab Inc., Case No. 4:16-cv-04829, in the US District Court for the Northern District of California.