Can a Commissioned Salesperson Sue for Unpaid Overtime in California?

Surprisingly, the answer is yes, sometimes. This became clear in Peabody v Time Warner Cable, Inc. California overtime article , a 2014 California overtime lawsuit. The rule applies in somewhat limited circumstances, but even so, some are puzzled at how infrequently it is employed. 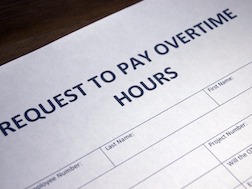 Susan Peabody worked for Time Warner Cable, where she sold advertising on the company’s cable television channels. The company paid her hourly wages on a biweekly basis but calculated and paid her commissions about once a month.

Most of Peabody’s paychecks included only hourly wages at a rate less than one and one-half times the minimum wage, the threshold under the California Labor Code for exemption from overtime protections.

After she left Time Warner, Peabody sued for various wage and hour violations, including failure to pay overtime. Time Warner argued that since some of her compensation was paid as commission, she did not fall within the class of lower-paid wage workers that overtime rules are intended to protect.

The court looked past the form of her compensation to get to the substance of her claim. The Peabody overtime lawsuit established three important guidelines:

• Employers who pay California employees on commission must provide them with a signed, written contract detailing how the commission is to be computed and paid.
• Inside salespeople must be paid commissions at least twice a month, regardless of existing pay schedules, and contrary to many employers’ practice of paying commissions monthly.
• Whether inside commissioned salespeople are exempt from overtime rules must be determined on the basis of the sum of wages and commission earnings on a weekly basis. An employee may be covered by overtime rules one week but not the next.

More CALIFORNIA OVERTIME News
Who might use Peabody to recover unpaid overtime?

• Inside commissioned salespeople. California labor law does not extend overtime rules to salespeople who work off-site;
• Employees who receive some combination of wages and commissions. The most problematic situation is where there is little history of the two combining to equal one and a half times the minimum wage. As the California minimum wage increases, often on a very local basis, employers may also miscalculate this threshold ;
• Anyone working on an unwritten commission agreement, or who receives commission payments irregularly.

The list is hardly exhaustive. As commissioned salespeople become more aware that success is possible, the rules set out in the Peabody overtime lawsuit may prove more useful.