McDonald's Restaurants will head to trial in May to defend itself against allegations of California overtime violations on a lawsuit filed by a class of thousands of overnight shift workers. 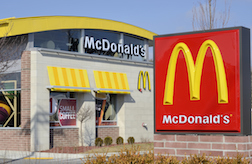 A summary adjudication is a ruling by a judge that a certain issue within a lawsuit is settled and need not be tried. The trial in May will determine damages that McDonalds' must pay.

Sanchez filed the original lawsuit in January 2013, alleging wage and hour violations. The following year, three more plaintiffs joined the lawsuit, and Jones in 2016 certified a class of more than 6,000 workers related to the overnight shift overtime claim.

In this case, class plaintiffs filed a motion earlier this year that McDonald's method of calculating overtime violates the California Labor Code, which requires employers to pay one-and-a-half-times the employee's regular rate of pay for any work in excess of 12 hours in any consecutive 24-hour period at the same time each calendar day.

Class plaintiffs contended that McDonald's violated that requirement because the fast-food mammoth "configured its electronic timekeeping system to attribute all hours worked by a class member on a specific shift to the date on which that shift began rather than the date the work was actually performed," according to the ruling.

More CALIFORNIA OVERTIME News
However, McDonalds argued that by treating an overnight shift as a continuous shift associated with the date that the shift began, as opposed to splitting it between two dates, the fast-food giant ensure that employees working shifts across the workday divide are paid overtime when they work longer than eight hours.

The plaintiffs' overtime claim is based on McDonald's "failure to pay for overtime hours worked from multiple shifts in a 24-hour period, "not just a single shift spanning two days," according to court documents.

McDonald’s has estimated damages from unpaid overtime to be $400,000 while class members contend that the amount is more than $2 million, according to Bloomberg BNA's Daily Labor Report.