Did Some California Employers Miss the Overtime Memo?

Some employers seem to have missed the memo: California workers are entitled to California overtime for hours worked after an eight-hour day or over 40 hours in a work week. 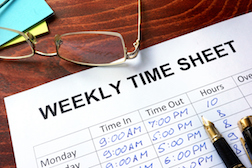 Last month wage and hour lawsuits were filed against a flooring company and an auto retailer, alleging violations of California labor laws, including unpaid overtime.

Auto salesman Tarek Abu-Hajar filed a lawsuit against AutoNation, which purports to be the largest new and used automotive retailer in the US, claiming he was not paid for all the hours worked. Abu-Hajar claims he suffered damages from not being paid minimum wages, not getting meal and rest breaks or overtime pay. The suit was filed in US District Court for the Central District of California Case number 2:17-cv-02142-PSG-KS.

This isn’t the first time AutoNation has been slapped with a labor lawsuit. In June 2011 a class action lawsuit against AutoNation in San Jose, California was filed by on-site sales associates, claiming the auto dealer unlawfully deducted commissions from their wages in violation of the California labor code. AutoNation allegedly serviced or repaired previously purchased cars for free, but deducted these costs from the Sales Associates who originally sold said cars. AutoNation was also accused of intentionally misclassifying sales employees as exempt to avoid overtime pay. Lilly v. AutoNation, Case No. 1-11-CV-203569.

Plaintiffs in both cases request a trial by jury to seek unpaid overtime wages and more.

More CALIFORNIA OVERTIME News
One fire department got the overtime memo. Some firefighters are raking in almost $400,000 per year and over half of the full-time firefighters in San Ramon, California fire district earn more than $300,000 annually, according to a report from watchdog group Transparent California and CBS News. They are logging a lot of overtime.

“It’s unreasonable, it’s unaffordable and most importantly, from a taxpayer’s perspective and from the perspective of the firefighters, it’s unsustainable,” said Jack Weir, president of the Contra Cost Taxpayers Association. But firefighters defend their exorbitant salaries, saying that “paying one firefighter to work overtime saves more money than paying two firefighters to work regular hours.” San Ramon Valley Fire Chief Paige Meyer said a starting firefighter in San Ramon would make about $90,000 in salary alone, according to CBS.