California farmworkers will not be entitled to extra California overtime starting in 2019. Currently, agricultural workers receive overtime only after 10 hours. Bill AB2757 would have meant they were entitled to overtime after eight hours. 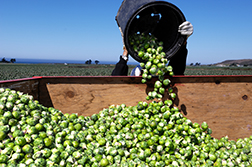 The Los Angeles Times (June 2, 2016) reported that legislation to give farmworkers additional overtime pay was rejected by the State Assembly. AB2757 would also have allowed for suspension of the overtime rules if California’s new minimum wage increase is also suspended due to an economic slowdown. Minimum wage is set to gradually increase to $15 per hour by 2020.

This isn’t the first time that lawmakers have attempted to adjust overtime under the California labor law so that agricultural overtime equals other worker overtime in California. Congress excluded farmworkers from wage protections extended to other industries in passing the 1938 Fair Labor Standards Act. California subsequently mandated that farm laborers receive overtime pay if they work more than 10 hours in a day or more than 60 hours in a week.

Assemblywoman Lorena Gonzalez put forward Bill AB2757, which would have guaranteed agricultural workers one-and-a-half times their normal wages for every hour they work over eight in a day or 40 in a week. Working more than 12 hours a day would have meant double pay.

In 2012, a similar bill failed in the California Assembly two years after then-Governor Arnold Schwarzenegger vetoed another such proposal.

More CALIFORNIA OVERTIME News
The California Farm Bureau Federation and the California Cattlemen’s Association opposed the bill, stating that imposing the standard workweek on agriculture could bring drastic cost increases and could prompt some growers to leave the state. However, most states don’t offer any overtime pay to their farmworkers and field-workers. As of 1976, California is one of only five states to offer premium pay for farmwork. Their reasoning to oppose also said different rules apply to farmworkers because of the unique nature of an industry governed by weather and the seasons.

In California, farmworkers and field-workers remain the only hourly workers denied overtime after eight hours of work in a day. Some workers are also denied rest breaks, meal breaks, and donning and doffing time. Perhaps more overtime claims will arise as a result of this bill…

Posted by
Ri
on June 26, 2016
It's real simple..There are so many Illegals that even if they had been stupid and passed this bill, they would have simply made sure the workers on put in 8 hours, and had another crew standing by to work the next shift, and the third...etc. So the first worker who may have at least received up to 10 hours of pay, would now only get the 8.. Lawmakers don't work this stuff out in their minds, because they are the reason there is so many workers standing by to do this without border enforcement.