The owners of a French bakery in California have been ordered to pay more than $15 million to settle allegations of abuse of workers, including failure to pay overtime, human trafficking and retaliation. L’Amande French Bakery, with locations in Beverly Hills and Torrance before it closed, was accused of trafficking workers from the Philippines to California, paying them well below minimum wage, and subjecting them to terrible living conditions. In 2014, the bakery’s owners were ordered by the California Labor Commissioner’s Office to pay almost $250,000 to workers for wage violations. 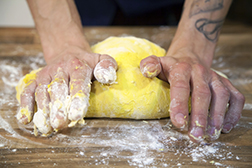 The employee lawsuit was filed by 11 Filipino workers, who were brought to California on E-2 visas, with promises that they would earn double the pay in California that they earned at home. E-2 visas are used to authorize foreign nationals who invest in US businesses to bring foreign workers to the United States for up to five years. But workers brought in on an E-2 visa must have specialized skills that are considered essential to the business, or they must perform executive or supervisory roles within the business.

The plaintiffs were allegedly promised work as skilled bakery chefs and managers, but instead were put in menial work and told they would owe the bakery owners $11,000 if they did not continue in their employment. Some workers were paid as little as $2 per hour for painting, cleaning and landscaping before the bakery opened, making it almost impossible for them to make the $11,000 they would need to pay their employer. They also reportedly slept for months on the floor of their employers’ home.

When the bakery opened, the workers endured 13-hour workdays, seven days a week, and were not given time off for illness or injury. Their hours were compensated at around $3 and hour and allegedly did not include overtime pay.

More CALIFORNIA OVERTIME News
“When the Workers complained about the long hours, illegally low pay, and intolerable conditions, Ana [owner of the bakery] threatened to collect on the Workers’ $11,000 ‘debt,’ an amount that the Workers had no means to repay,” the lawsuit argues. When the California Labor Commissioner’s Office found out about working conditions at the bakery and started an investigation, the bakery’s owners allegedly harassed and threatened the Workers to hide the wage and hour violations.