A California overtime lawsuit involving about 134,000 Taco Bell workers has been settled against the giant fast-food chain. 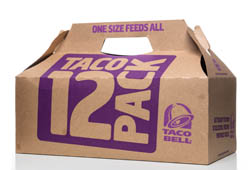 The workers skipped meal breaks, which is a violation of the California labor laws. The plaintiffs also claimed that from 2003 to 2013, they were not provided with meal breaks during the fifth hour of work if the shift lasted more than six hours; and Taco Bell only gave workers one 10-minute rest break instead of the mandatory two breaks for shifts lasting up to seven hours.

The lawsuit included unpaid overtime, unpaid minimum wages, unreimbursed business expenses, vested accrued vacation wages and other claims. A federal jury, however, only found that the class of workers were only paid 30 minutes instead of 60 minutes worth of wages when they skipped their 30-minute meal breaks. The jury awarded the workers a total of $495,913, according to a Law360 report.

This settlement begs the question: how much money would Taco Bell save by not paying its employees another 30-minutes worth of wages? Taco Bell has become notorious for California labor law violations. It settled a class action with Taco Bell assistant managers in 2013 for $2.5 million for denying them overtime pay. Taco Bell claimed they were supervisors in order to deny them overtime pay.

LawyersandSettlements has documented overtime lawsuits filed against Taco Bell since 1999. In 2001, the conglomerate paid out a whopping $13 million in an overtime lawsuit. Taco Bell was accused of pressing for “off-the-clock” labor and intentionally classifying employees as overtime-exempt managers despite their primarily hourly-worker duties. Taco Bell denied any wrongdoing.

More CALIFORNIA OVERTIME News
California employers such as Prologix Distribution may want to consider the costs of settling overtime lawsuits. Last month an overtime lawsuit was filed against “North America’s largest print media logistics provider” (according to its website) alleging the company failed to provide its drivers with proper wages and adequate meal and rest breaks. The plaintiffs, who are paid hourly, claim they were not always able to take 30-minute, uninterrupted meal breaks before their fifth hour of work. As well, Prologix Distribution allegedly required its drivers to work off the clock without pay. Sounds familiar...

The Prologix Distribution class action was filed by employment lawyers at Blumenthal, Nordrehaug & Bhowmik in the Los Angeles County Superior Court for the State of California. (Case No. BC608948.)

Posted by
dulce
on March 12, 2018
i worked at taco bell from 2007 to 2010 i remember clocking out for my 10 minute break am i included
Posted by
Chris
on October 21, 2017
I work at the taco bell and I'm included in this settlement but how can I receive my compensation, do I need to call the attorney of this case to get the info to claiming the compensation.
Posted by
Johnny
on September 16, 2017
I worked for taco bell from 2013 to 2015 as a closer 5 days a week. Am i involved with this class action lawsuit???
Posted by
Matt R.
on March 21, 2016
In MN, I was an employee at a Taco bell, and am wondering if this just applies to Californians, or is it nation wide ruling???