The judge in the ongoing Uber lawsuit has once again taken the ridesharing company to task, this time barring the company from communicating directly with drivers included in the class-action lawsuit. The move comes days after Judge Edward Chen ruled Uber’s arbitration clause was not enforceable, opening the door to thousands more drivers joining the class-action lawsuit. Plaintiffs in the lawsuit allege they were misclassified as independent contractors and thus were denied benefits and protections including overtime pay, workers compensation and health insurance. 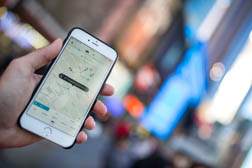 The previous arbitration agreement was ruled unenforceable as a matter of public policy by Judge Chen earlier in December, when he agreed to allow drivers who had signed the agreement - with some exceptions - to join the lawsuit. That ruling means up to 160,000 drivers could be part of the suit, including UberBlack, UberX and UberSUV drivers, even if they signed the arbitration agreement. Drivers who registered for Uber under a company name, however, are still excluded from the lawsuit.

More CALIFORNIA OVERTIME News
The original lawsuit was filed by Uber drivers who alleged the company misclassified them as independent contractors, meaning they were not eligible for overtime pay, health benefits or other protections. It also means Uber was not responsible for paying work expenses, such as vehicle maintenance or gas. But the drivers allege they were still treated very much as employees, with Uber exerting a great deal of control over their job duties.

In addition to ruling the arbitration agreement unenforceable, Judge Chen also ruled plaintiffs could pursue claims linked to work expenses. The trial is scheduled for June 2016.

Posted by
Jowwun Stephens
on January 19, 2016
How do I become a part of this lawsuite. I don't see any instructions of where to go. Thank you.