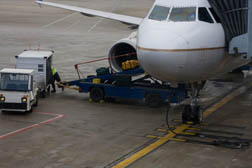 In a putative class action filed earlier this month, a former baggage handler working for SkyWest Airlines at the Los Angeles International Airport (LAX) alleges his former employer failed to pay him a living wage according to the city ordinance, as noted above.

The ordinance is hardly new, having been originally passed in 1997 and amended several times over to keep up with inflation and other factors. Specifically, the living wage ordinance encompasses companies that lease or license city property, as well as any entities that receive financial assistance from the city. The ordinance covers what are deemed “certain” airport employees, according to one of the amendments over the history of the ordinance.

In his action, filed November 3 in California Superior Court, Russell claims that he was not paid an hourly wage of $16.04 in combined pay and benefits as required under the ordinance and overtime pays laws. According to court documents, the plaintiff began working for SkyWest in May of 2012, leaving the airline’s employ this past September. At some point during his tenure with the airline at LAX, Russell and his coworkers “became aware that the airport has a higher minimum wage than the state minimum wage,” due to the city ordinance.

The lawsuit further alleges that baggage handlers were not paid additional funds required under the ordinance for health benefits, and were not paid the required amount of overtime pay as required under California overtime law. The lawsuit further notes that employees communicated their observations and concerns to their employer, but that SkyWest allegedly had no answer for them.

More CALIFORNIA OVERTIME News
The plaintiffs are seeking payment of the differential in income between what they were allegedly paid, and what they would have earned had they benefited from the full advantages of wage and benefits provisions as outlined by the city wage ordinance.

Specifically, the overtime pay and wage class action seeks to represent similarly affected employees who may have worked for SkyWest at LAX from November 2011 through to the date of the eventual judgment in the case. While SkyWest reportedly employs 10,803 people across the country, the overtime pay and wage-and-hour class action is confined to LAX, or about 100 people in total.