It’s been a long legal battle. Home Care Workers can’t 100 percent bank on California overtime yet, but a federal court decision has cleared a long and winding path to give home care aides in California and nationwide overtime pay. 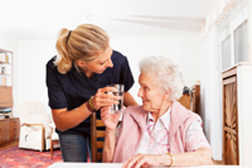 The US Court of Appeals in Washington decided on August 21 to allow the new overtime regulation from the Department of Labor, which was supposed to take effect July 1, 2015. California officials passed the overtime law last year, which meant that In-Home Supportive Services (IHSS) workers were entitled to overtime pay and minimum wage, but the California labor law was shelved, pending a review.

The ruling could still be appealed to the Supreme Court. If that happens, the state law would be put on hold pending that ruling, but Governor Jerry Brown doesn’t expect a holdup. According to Capitol Public Radio (Aug. 21) the Governor's administration expects to grant overtime pay to IHSS workers after an appellate court ruled last week that such providers are entitled to overtime pay.

To date $270 million has been set aside to cover Care Workers’ overtime costs. Workers will be paid time-and-a-half if they work more than 40 hours a week. However, they are limited to 66 hours a week.

The federal law proposed that “If you are employed only by the person you assist, or that person’s family or household, you may or may not be entitled to minimum wage and overtime pay, depending on your duties.”

Back in May 2013, California stakeholders and state officials said that overtime home care rules proposed by the U.S. Department of Labor and under review by the White House for certain caregivers could spell disaster for California’s IHSS program. They believed that the increased costs “would be enough to disrupt a government program used by 450,000 elderly and disabled Californians.” They argued that overtime would cost California’s IHSS program $150 million more in state funds every year, according to The Los Angeles Times (May 26, 2013).

Laphonza Butler, president of the California council of the Service Employees International Union, said she was confident that an agreement could be met regarding this issue. “Caregivers earn from $8 to $12.20 an hour and deserve extra pay for overtime,’ she told the LA Times.

More CALIFORNIA OVERTIME News
In June 2014, California decided to pay overtime to home health care workers starting January 1, 2015, along with pay for travel time and wait time. But the governor wanted to cap IHSS hours to 40 hours per week in order to avoid paying overtime. This would have been a severe financial burden to caregivers as many rely on working more than 40 hours a week because many workers are making minimum wage or less. And those people taken care of in their homes could be at risk if they didn’t receive care for more than 40 hours in a week. However the Obama Administration ruled that the FLSA (Wages and Fair Labor Standards Act) would cover caregivers.

“We anticipate that right now the regulations would not come back online until mid-October,” said H.D. Palmer, with the governor’s department of finance. “But that could be affected by whether or not there is an appeal of this ruling to the US Supreme Court.”

Posted by
Athena Bond
on November 21, 2016
You have to go up the chain to someone who can actually help you! Now that IHHS providers and the IHHS Public Authority is under the rules and laws of the FLSA, you can file a grievance with your local Wage and Hour Office of the Department of Labor, and file for your payment. You worked the hours and you are entitled to payment for your work period.

Sometimes it's the only way to get the attention of the people in Sacramento who can help you. There is also an IHHS Provider Appeals Unit you can contact who may be able to help you. Call 916-651-3488. (The Union should have given you this number.) I know though that not many people know about it, I found it by accident while reading County Welfare Director's policy letters!

Posted by
MIHAELA ANGHEL
on August 16, 2016
Every month, I have issues with IHSS Payroll Department Advance Pay desk in getting my overtime pay. No matter that I send the time sheets with delivery confirmation, no matter that I drop them personally to their in-box outside by the door and addressed to a specific person in that department, they still claim every month, that they did not receive my time sheets. They say they will mail me new ones, and need to fill them out and then wait again and again for my own money. I am on the verge of loosing my car and be without transportation which I need to take my elderly handicapped mother to the doctor and on some other errands like buying food for the house. Is the U.S.Government above the law? Those social workers who are making over $80000 a year treat us caregivers with disrespect, they lie to your face and looks like is nothing we can do. Is that true? Nobody in this country can fight against the government ? How are we suppose to survive if labor laws are not applicable to them/ How are we able to survive if every month we have to wait ( according to their recording when you call the payroll department), 12 days after the day you mail your time sheet for our own money.