An overtime pay laws class action has been filed in California against a hospice and palliative care enterprise alleging the defendants failed to pay plaintiffs proper overtime pay, or provide rest periods and meal breaks as mandated by the California Labor Code. 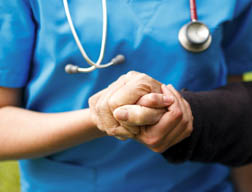 It appears as if the basic payment of overtime wages by Seasons Hospice and Palliative Care of California, Inc. to its non-exempt employees does not appear to be in dispute. The issue with the overtime pay is non-discretionary bonus wages paid to employees based on work performance. It is alleged that such bonus pay amounts were not included in the employee’s hourly rate when overtime pay was calculated for additional hours worked as mandated by overtime laws.

Because this bonus pay was left out of the calculations, the employees received a lessor amount of overtime pay than was their due, or so it is alleged.

A companion issue to the unpaid overtime alleged in the lawsuit is the lack of appropriate meal breaks as mandated under California employment law. Meal breaks are to be 30 minutes and taken in an uninterrupted fashion after the fifth hour of work. It is alleged the defendant did not have a policy or provision in place to provide a full off-duty, uninterrupted meal break according to the employment laws observed by the state.

Missed rest periods and meal breaks while an employee continued to work and respond to the needs of patients and the rigors of the job, would translate to additional time spent working.

It is not known what specific penalties and damages the plaintiffs are seeking in their overtime pay lawsuit.

More CALIFORNIA OVERTIME News
Various overtime pay lawsuits are brought to the fore when claims of unpaid overtime cannot be settled by any other means. Failure to pay overtime can be the result of improper or incomplete keeping of records, or even malicious intent through the incorrect classification of an individual or the job an individual holds as exempt from overtime pay, when in actual fact, the dynamics and circumstances of the job and the work performed qualifies the hourly employee for overtime pay.

The unpaid overtime California class action was filed August 10 in the Superior Court of the State of California, in and for the County of Los Angeles. The case is Rena Sutton, Marybell Masferrer-Hoyd, and Irena Pawlak v. Seasons Hospice and Palliative Care of California, Inc., Case No. BC590870.