Plaintiffs who worked for a cleaning company have filed a California overtime lawsuit alleging they were misclassified as contractors and not paid properly for overtime in violation of overtime pay laws. The lawsuit also alleges failure to pay minimum wage and failure to provide proper rest breaks. 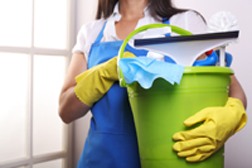 According to court documents (found online at Business Insider; 11/12/14), the lawsuit was filed by two workers against Handy, a company that provides on-demand housecleaning services. The plaintiffs allege that Handy misclassified them as independent contractors rather than as employees, which they say they actually were. By classifying the workers as independent employees, the company allegedly violated overtime pay laws, minimum wage laws, and meal and rest break laws.

Plaintiffs allege that they were required to be available as a cleaner for the company for at least five cleanings jobs per week, and must also complete a cleaning under the observation of a Handy representative. Cleaners receive between $15 and $22 an hour for time spent cleaning. They book cleaning jobs through the Handy app. Customers are charged through their credit card, with the amount charged reportedly including tax and tip.

More CALIFORNIA OVERTIME News
“Handy has the exclusive control over the price and length of time for each cleaning job,” the lawsuit states. “Cleaner compensation amounts and terms are not negotiable. Handy designates the highest paying jobs - last minute jobs - to those Cleaners who work the most number of jobs. The Cleaners can neither negotiate the price nor the length of cleaning.”

Additionally, the lawsuit alleges that cleaners regularly work more than eight hours in a day or 40 hours in a week, including driving to each cleaning location. Although they are paid for the time spent in the home cleaning, they allegedly are not paid for time spent driving to and from locations, or time required by Handy for other work-related tasks, including communicating with clients.

The lawsuit, case number RG14746429 in the Superior Court of the State of California for the County of Alameda, seeks class-action status on behalf of employees of Handy from four years prior to the lawsuit being filed. This would actually cover Handy for the entire time it has been in operation.