Edmund G. Brown, the California Attorney General is suing one of the largest drywall contractors in Los Angeles, Interwell Development Systems, for "cheating" hundreds of their employees out of approximately $5 million in benefits and wages.

Interwall employed what Brown calls, "a sophisticated and heartless scheme" that involved several different businesses that cheated the employees out of mandatory breaks and overtime pay. Brown states that the lawsuit is sending a strong message that California does not tolerate the ripping off of employees by the companies they are employed by.

What the lawsuit alleges is that Interwell failed to pay overtime to its employees and did not provide employees with wage statements that itemized deductions and earnings. The lawsuit also states that employees were not permitted to take breaks during their afternoon shifts. The company significantly reduced its labor costs in order to bid lower than their competition on approximately 150 projects involving drywall installation in the Los Angeles, Riverside, San Bernardino, San Diego and Orange county areas. The offices of the company are maintained in Laguna Beach and Irvine. 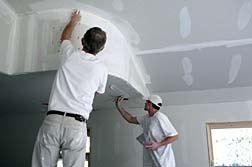 Investigations against Interwell have found that employees were working up to 12 hours six days per week, which means employees were working Monday through Saturday with just Sunday off. However, despite the up to 72 hour work weeks, Interwell was not paying the employees for the overtime worked, therefore employees working up to 72 hours were receiving checks for 40 hours worth of work. Interwell also denied the employees breaks despite their long shifts. California law states that workers must receive ten-minute breaks for every four hours worked. Overtime pay is to be paid when more than eight hours have been worked in the course of a day or forty hours have been exceeded for the week.

What Interwell did to avoid paying overtime pay was set up complicated business operations with affiliate companies that paid for the extra hours at regular pay rates. There is one particular case in which an employee worked a 68-hour week for Interwell, but was paid by Felts Construction Company for 40 hours and was also paid by Cinco Construction for 28 hours at regular pay rates rather than overtime rates for the other 28 hours. Another company involved in these business practices is ANCCA Corporation, which also does business under the name of N-U enterprise.

The figure of $5 million in damages is a result of approximately $2.5 million lost in overtime pay and $2.5 million for unpaid work performed during break times. The attorney general made the decision to bring about the lawsuit in order to put a stop to these illegal practices performed by the company and to collect the necessary restitution for the employees.

Brown seeks to achieve the following against Interwell:
- An injunction that will prevent Interwell from denying employees overtime pay.
- Restitution for the thousands of dollars in wages lost by the employees.

More News
- For Interwell to have to pay up to $2,500 in civil penalties for every violation of California's Business and Professions Code section 17200.

Interwell is not the first company that Brown has sued for such unfair business practices. In December, Brinas Corporation was sued for paying employees less than minimum wage and denied employees overtime pay. Brown also sued PacifiStaff for teaching construction companies in California how to avoid paying worker's compensation benefits, which are mandated by the state.

Currently, there are other ongoing investigations that involve employment, poor record-keeping practices, and payroll issues of businesses and construction companies throughout the state of California. Such suits are to pay employees restitution and to show others that they will get caught.