A growing area of unpaid wages litigation includes off-the-clock work such as donning and doffing safety gear. Employees in California who are required to put on and take off protective gear for their shift and are not paid for their time may be eligible to file an unpaid wages lawsuit against their employer. Kitty Szeto, attorney at R. Rex Parris Law Firm, says employee time is valuable time that should be properly compensated by employers. 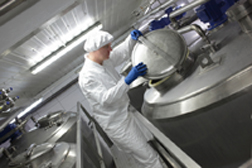 Donning and doffing lawsuits typically involve employees who work in assembly-line-type jobs - although they can apply to anyone who has to wear specialized gear for work. In these assembly-line jobs, a company mass-produces one type of product and employees are required to be dressed in safety gear (sometimes called personal protective equipment, or PPE). The safety gear is designed to protect employees from hazards, but in food production, the safety gear is also meant to ensure the food is clean and free of contaminants.


“Employers require employees to come in before their shift to put on this gear, but they don’t pay them,” Szeto says.
“Likewise for lunch and rest breaks, employees not only have to take off gear and put it back on, but they have to wash and spray the gear for health and safety reasons. That cuts into their time for lunch and rest breaks and they aren’t paid for it. These employers only want to pay for eight hours and nothing more.”

Lawsuits filed related to donning and doffing (putting on and taking off of safety gear) issues are often called off-the-clock cases because work is being done by employees without pay. In a similar vein are lawsuits where employees are required to wait for a bag check before being allowed to leave their worksite, time that is again not being paid for.

“There are cases around the country where people are litigating this issue of employees doing work before and after their shifts - putting on clothing or waiting for bag checks,” Szeto says. “It’s a constant issue.”

Employees who work on assembly lines and are required to wear any sort of safety gear for their work, including but not limited to aprons, hairnets, hard hats, steel-toed boots, safety glasses, coats, fire retardant clothing or freezer wear, and are not being paid for that time, may be eligible to file a lawsuit against their employer.

More UNPAID WAGES News
And although people might wonder what the big deal is for a minute or two of a person’s day, Szeto says that time adds up over a shift and over a year. Furthermore, unpaid time at work is valuable time that employees could be spending with their families.

“It’s not just a minute or two,” Szeto says. “It’s at least five to 10 minutes at a time, before work, at lunch and rest breaks, and after work. It adds up each day. It’s not a small amount when you look at it per person per shift, and it affects everyone in the plant. Everyone’s time is valuable. That five to 10 minutes is valuable time that employees are taking from their family to show up earlier than they should. They should be compensated for it. Unless someone makes a change, it will always be the same.”