Despite federal and state laws in place to ensure that heath care workers—from behavioral health professionals in Pennsylvania to in-home caregivers in California—are getting overtime compensation they are entitled to, employers are still misclassifying employees to avoid paying overtime. And despite a recent settlement in favor of the employees, it almost seems like employers such as Progressions Behavioral Health Services Inc. haven’t read the memo… 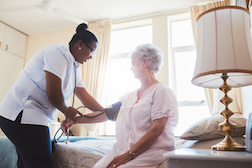 A federal judge recently approved an $865,000 settlement that resolved overtime claims from behavioral health professionals who were employed by Progressions Behavioral Health Services Inc. The clinic classified their employees as independent contractors, but judge Elizabeth Hey ruled them as hourly employees and therefore entitled to overtime, other employee benefits, and payment for other work that was deemed “nonbillable”.

Judge Hey conditionally certified the class action and, depending upon the degree of their wage shortfall, participating class members will receive from the settlement fund from $500 up to $70,000 on a pro rata basis. Plaintiff’s attorney Michael Murphy of the Murphy Law Group in Philadelphia told The Legal Intelligencer that, "We're very pleased with the result," and the settlement was agreed upon after a day of negotiation in mediation.

According to the PennRecord, the overtime complaint was filed in May, citing the Fair Labor Standards Act (FLSA) and the Pennsylvania Minimum Wage Act. Three plaintiffs alleged that they worked for more than 40 hours per work week but were not paid overtime, although they logged overtime hours.(U.S. District Court for the Eastern District of Pennsylvania case number 2:17-cv-02439-JP).

More CALIFORNIA OVERTIME News
From January 1, 2015 until February 1, 2016, federal overtime regulations were revised to provide overtime protections to homecare workers and employers were required to pay one and one-half (1.5) times the employees' regular rate of pay, for their overtime hours. Plaintiffs' attorney Matthew Helland of Nichols Kaster, LLP said in a press release that In-Home Supportive Services (IHSS) Homecare Workers were eligible for overtime under federal law in 2015, but the state and county agencies failed to pay it. “These employees worked long hours providing important services and are entitled to fair and legal compensation."

According to the press release, IHSS currently serves over 550,000 recipients through over 460,000 homecare workers (providers) in the state of California. The California Department of Social Services is responsible for the oversight of programs, including IHSS, which serve more than eight million people across the state. The Los Angeles Department of Public Social Services is the second largest department in Los Angeles County and is involved in administration and oversight of the IHSS program at the county level.