It seems impossible in this day and age that any employer would try to get away with not properly paying employees for hours worked. Yet, in California there are many employers who are not paying employees for overtime hours. Now, the state of California is defending the rights of workers by filing lawsuits against companies that violate state laws.

The most recent lawsuit was filed against Interwall Development Systems Inc., alleging the company denied its employees five million dollars in overtime pay and other benefits. Furthermore, the state claims that Interwall did not allow workers to take mandatory breaks during afternoon shifts and did not provide itemized wage statements.

A statement from the Attorney General's office says, "Interwall employed a sophisticated and heartless scheme, involving multiple businesses, to cheat its employees out of overtime and mandatory break periods. Today's lawsuit sends a strong message that California will not tolerate companies that rip off their employees." 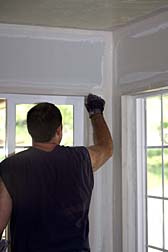 According to the lawsuit, Interwall set up a number of affiliate companies through which employees were paid for regular time no matter how many hours they worked. For example, an employee who worked 60 hours in a week would be paid for 40 regular hours by one affiliate and then 20 regular hours by another affiliate. This was allegedly done in an attempt to slash labor costs and underbid competition for drywall installation projects in California.

Officials say that many employees worked six days a week, up to twelve hours per day, with no overtime pay. The suit seeks financial compensation for the workers, civil penalties for each violation and an injunction forcing the company to pay overtime and other benefits to its workers.

In December 2007, the state of California also filed a lawsuit against two janitorial companies, alleging that employees of the companies worked as many as seven days a week for less than minimum wage. The suit alleges that employees were not paid for overtime hours and were not given rest breaks. Some employees allegedly made only $50 a day, despite working 10 hours—and some of their paychecks even bounced.

The lawsuit seeks $700,000 in wages, although along with penalties the companies could wind up paying more than five million dollars.

Meanwhile, in Pasadena, a state judge is calculating how much money a hospital owes its employees for five years of underpaid overtime. The lawsuit was filed by four former nurses at the hospital who alleged they were not adequately paid for overtime hours from 1999 to 2004.

More News
Under California law, employees must receive overtime pay for work over eight hours a day or 40 hours a week. A 10-minute break must also be given for every four hours worked. Unfortunately, the companies involved in the previously mentioned lawsuits are not the only ones that are underpaying their employees. Many employers fail to properly pay their employees for overtime hours. In some cases, this is an honest mistake; the result of not fully understanding the law. In other cases, employers are purposely trying to save money by not paying their employees what they are owed.

In either circumstance, the employee is the one who suffers—by working long hours without proper pay. However, the courts are siding with employees who claim they are owed overtime wages—by awarding them not only with lost wages but also with punitive damages. Employees who feel that they are being improperly denied overtime wages can file lawsuits of their own to recover their wages.