Henry Adams worked as a program manager in the IT department at Kaiser Permanente. "When I was hired by Kaiser three years ago, I was told that my salary was to be based on a 40-hour week," says Adams. But just one year later, he was often working an average of 16 hours a day, until he got his walking papers. Adams didn't get any overtime pay--Kaiser knows how to save money. And they chose to ignore overtime laws.

Henry Adams (not his real name pending a lawsuit) explains how he, along with 300 other employees, worked overtime until they were eventually terminated. "We had a new CIO (Chief Information Officer) and he wanted to make changes but didn't understand health care," says Adams. "He just wanted to cut heads. He instructed VPs to cut their staff but one VP explained to him that it would cost a lot of money in severance pay. So he signaled the VPs that there was a way to under-rate employees and let them go—without paying overtime and not paying them the full severance package."

Kaiser did it.
And they got away with it—so far. 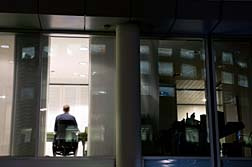 "Historically, 1-2 percent of Kaiser IT employees had less than a "three rating", says Adams. He explains that Kaiser has a rating system to review its staff--a review that takes place twice a year. A "five rating" means that you will receive 150% of your bonus, less than "three rating" translates to termination—this system applies to all employees. "This means that the VP has to get those employees in his department classified as less than three, either by saying they are incompetent or other reasons to have them terminated and not pay out full severance packages," says Adams, " thereby saving the company a lot of money."

"A lot of people were terminated and managers were forced to pick up the slack. I was a program manager and after this layoff occurred, I was working about 16 hours per day, often six days a week, without overtime pay. I asked HR if we were going to be compensated for these extra hours and they said 'no' because we were exempt. When we were asked to work these extra hours, we had no idea that we were going to be terminated.

Before this layoff happened, I did work some OT without compensation but I was rated fairly and got a bonus. But when this new VP came in, not only did I work these extra hours, I wasn't given a bonus.

More News
Then they did another round of layoffs. This time I was terminated, along with 300 other employees, on October 15, 2007. They gave us a smaller severance package than we were entitled to; we had no choice but to take it.

The day I was laid off, I got a call on my cell phone at 6.30 pm. The VP asked where I was. I was at the office working, where I had been since 6.30 that morning. He then told me that effective immediately, I was laid off. He said my performance was 'stellar' but 'my position has been eliminated and we have to let people go'. I wasn't given my bonus and of course did not get paid a dime of overtime. I figure I am owed at least 2,000 hours of overtime: that works out to a whole lot of money. No wonder they laid me off.

There are so many illegal practices going on with this company right now—overtime is just one issue."

If you are owed unpaid overtime, please contact a lawyer involved in a possible [Overtime Lawsuit] to review your case at no cost or obligation.
Request Legal Help Now