Workers employed by a company providing food service at two Pennsylvania hospitals have brought a lawsuit against Sodexo, alleging the company failed to provide overtime pay for hours worked above and beyond the standard compliment within a normal work week. The class-action lawsuit was brought by Louis Olsen and Shari Kurtz on behalf of some 80 current and former colleagues. 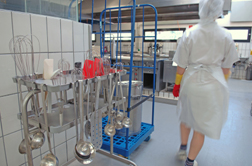 The allegation is that Sodexo either demanded or permitted workers to start work early, work through lunch breaks and after hours without additional compensation.

The Morning Call reports that the action was filed December 9 in Lehigh County Court. The two hospitals involved—St. Luke's Hospital and Good Shepherd Rehabilitation Hospital—were not named as defendants in the overtime rules lawsuit.

In an interview with the Morning Call published December 15, plaintiff Kurtz indicated she had worked at Good Shepherd for 21 years with no complaint until the hospital made the decision to outsource food preparation and food services in 2005.

The plaintiffs allege that overtime labor laws are being flaunted. According to the complaint, workers were routinely required to start their shifts 45 minutes early, in addition to allegations that workers were often required to work through lunch and after hours without overtime pay, according to plaintiff Kurtz, who claimed she never received overtime.

It's been reported that workers have been attempting to unionize. The Morning Call also reported that food service workers at Sacred Heart, Good Shepherd and Lehigh Valley hospitals staged a one-day walkout in October to protest low wages, poor benefits and anti-union tactics.

Kurtz, who is one of the lead plaintiffs in the pay for overtime lawsuit, says she is a single mother and finds it difficult to make ends meet. It's been reported that Sodexo employs in excess of 1,000 workers in the Lehigh Valley area, some of whom earn just a dollar above the mandated minimum wage of $7.25 per hour.