A fight over overtime pay appears to be over for an employee of a school board who doubles as a golf coach. The plaintiff was looking to be paid for overtime, but a US District Court in Virginia disagreed with his interpretation of overtime law. 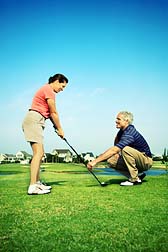 According to the December 21 issue of Virginia Lawyers Weekly, the plaintiff makes $25.69 per hour as a school security officer and receives a $2000 honorarium as a golf coach.

In his statement of claim, the plaintiff testified that he does the most work as a coach from June to November, but that over the course of the year he meets with college recruiters and answers e-mails, phone calls and text messages related to coaching. He argued that he is available to his players around the clock, even answering text messages from his players while eating dinner with his family. He also drives players home when their parents are late or unable to pick them up.

More OVERTIME News
Given the extent of his work with students—as well as his time spent taking tickets at sporting events—the plaintiff sought overtime under the Fair Labor Standards Act (FLSA).

However, the US District Court in Alexandria found that his work as a golf instructor does not fall under the definition of an employee under FLSA.

After examining facts relevant to the plaintiff's coaching position, the court found that his yearly stipend of $2,000 meets all the qualifications of a nominal fee and that he is acting as a volunteer when coaching golf. The amount he is paid is not tied to his productivity and does not vary depending on how much time he spends on coaching or how well the team performs during the season. Any coach is free to spend as much or as little time as he wants on coaching and activities related to the team. The stipend remains constant.

His Virginia overtime claim was denied.