Wage and Hour lawyer Greg Jones says that many people are unaware of overtime laws; they don't realize that issues such as donning and doffing or unpaid meal periods may constitute overtime. "Most people think of overtime as working more than 40 hours a week, but there are other types of overtime that aren't apparent, and a lot of these employees are getting screwed," says Jones. 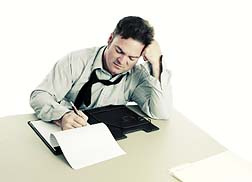 Jones also looks for types of overtime that may not be apparent, such as donning and doffing (below) or interrupted and/or unpaid meal periods. As well, some employees are charged for equipment and uniforms; others are misclassified. "For example, a lot of companies tell workers they are now salaried or systems managers while they are not really managers in any sense of the word," says Jones. "Employers misclassify employees as a ruse so they get a fixed salary but they are working in excess of a 40-hour work week. Some typical examples are IT employees and stockbrokers."

Overtime Class Action
"Most people think of overtime as working over 40 hours per week: 5 days a week, 8 hours a day," says Jones. "But in reality, many of them are owed overtime pay. Oftentimes cases such as donning and doffing or unpaid meal periods apply to more than one individual or a few employees; in those cases class actions can become an effective tool as it encompasses the same class of employee and offsets the legal expenses if each suit was brought individually."

Donning and Doffing
Donning and doffing cases are a frequently litigated subject area under the Fair Labor Standards Act (FLSA). Attorney Greg Jones represents people who work in poultry plants, where donning and doffing cases are prevalent. Donning and doffing pertains to people whose work requires them to put on and take off protective clothing as a prerequisite for doing their job. "It takes these people 15 minutes every morning to don their uniform and equipment and 15 minutes every evening to doff," Jones says. "They may not get paid for this time but it should be included in their regular work hours."

These cases not only apply to the meat and poultry industry; employees in the medical, dental, engineering, scientific research, waste disposal, food services, bottling and packaging, and certain retail industries may also be required to spend time donning their protective gear and/or doffing the protective gear at the beginning and ending of a shift, or during break periods throughout the workday.

On November 8, 2005, the United States Supreme Court issued a unanimous decision in two consolidated cases, IBP v. Alvarez and Tum v. Barber Foods: the time employees spend walking between required protective gear changing areas and production areas and time spent waiting to remove that gear at the end of the workday is compensable under the FLSA, but that the time employees spend waiting to receive protective gear before the work shift begins is not compensable.

If you are working more than 40 hours a week, you may be entitled to overtime compensation. "There are federal law protections against retaliations for any worker making a wage and hour claim," says Jones.