Home healthcare provider Gentiva has been hit with an overtime lawsuit alleging its compensation plan shortchanges its thousands of nurses and physiotherapists across the US. "It is an unusual pay scheme," says attorney Christine Webber, who filed the suit on behalf a group of nurses from North Carolina and New York State. "Certain activities are done on an hourly basis; other activities are on a fee basis, other activities they don't count at all." 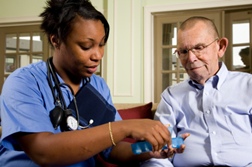 Potential class members include the majority of Gentiva's current 30,000 workers as well as former employees. "It is potentially a very large group," says Webber, a partner with Cohen Milstein, Sellers & Toll in Washington DC.

The five lead plaintiffs in the suit say they often worked 50 to 55 hours a week due to the duties they were assigned. "They were updating medical charts, following up with doctors for confirmation of directions," says Webber. "But that is all work they were doing in the evening or on the weekend, and they were not paid for that."

Gentiva, one of the largest homecare providers in the country, is a publicly traded company that has been in business for almost forty years. Its staff provides postoperative care and services to millions of Americans every years.

"Perhaps the weak economy encourages employers to break or bend the law in a way they would not dare to in flusher times," says Webber. "Weak economy aside, there is also a nursing shortage in this country, and these are people doing important work."

Although Gentiva employees have been classified as exempt under the Fair Labor Standards Act, Webber believes the homecare providers duties or method of payment meets the criteria for that status.

Gentiva has yet to respond to the suit, filed on May 10.

More OVERTIME News
Webber says it is possible Gentiva accidently run afoul of the rules because of the unusual nature of the pay plan. "It is relatively unusual to try to pay people on a fee basis, and perhaps it is lack of experience in that area that lead them to the mistakes we think they have made in setting up this process," says Webber.

Christine Webber is a partner with the firm of Cohen, Milstein, Sellers and Toll and a member of the Civil Rights & Employment practice team. She is currently involved in a number of high profile class action employment suits and Fair Labor Standards Act cases, including Dukes v. Wal-Mart, involving allegations of sex discrimination for 1.6 million current and former female employees. She holds a bachelor's degree from Harvard University and a JD from the University of Michigan School of Law. Her work has returned seven- and eight-figure recoveries for a number of clients.

Posted by
Lisa
on April 9, 2014
Gentiva sucks the life out of you physically and mentally. With a caseload of 45 patients weekly and charting 4 hours every night and no overtime pay. I basically make minimum wage after driving approx 200 miles per day and charting 40 hours a week. They should be ashamed of themselves. I deserve what is owed to me. My patients get exceptional care. Move forward with this law suit. We all work our butts off for this company and it's time to take them to the cleaners!!!
Posted by
Dianne Weaver, RN
on January 29, 2014
Gentiva did not properly disclose their pay method prior to being hired. I just went through orientation and this was not disclosed in orientation. Basically you learn as you go the compensation plan. Knowing what I know now, I would have negotiated the pay plan differently. Due to nondisclosure, I feel this law suit should move forward. I am another nurse working 7 days a week (most weeks) putting in greater than 60 hours/week. Now that Gentiva has an electronic record, it should be trackable through time stamps in documentation some of the hours worked. No way to track phone calls and coordination of care, along with hours spent on Sunday doing the upcoming week's schedule. I am mentally and physically exhausted from this job. I have never had a job like this with so much effort put forward and no appreciation. It is abusive in my opinion and the expectations are unrealistic. All Case Managers in Gentiva should get a paid admin day once a week to get caught up. And, you deserve to get reimbursed on your vehicle milage accordingly and your travel time. They say you get the milage compensation when you file your federal and state taxes. My question is, should the tax payers of America be subsidizing the company, Gentiva?
Dianne, RN