You can bet your double latte that some people are wondering why they took that management job at Starbucks. The high-end java shop has been slapped with yet another overtime lawsuit under the Fair Labor Standards Act—this time it's the managers that are complaining that they were, as attorney Adam Chotiner describes it, "little more than glorified baristas." 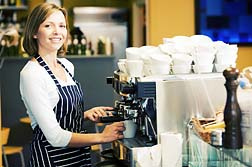 Chotiner believes that Starbucks has wrongly classified store managers as being
exempt from overtime. "We don't believe they fit the exemption," says Chotiner. "Their primary duty is to make coffee, sell coffee, serve coffee and clean the bathrooms just like the hourly employees they supposedly supervise. They should receive overtime pay for any hours they worked over 40 hours but they don't."

Although Starbucks store managers get a little prestige from their title, Chotiner argues that's about all they get that is different from the baristas. It may be that it simply doesn't pay to be the coffee boss. "Certainly that is one of things we are going to explore. We think if you take their salary and divide it by the number of hours they really work," Chotiner says, "you will find that on an hourly basis they make very similar to what the hourly employees make."

And it is not just a few extra hours here and there for store managers. The number of unpaid overtime hours is very significant according the evidence prepared by Chotiner. "They should be compensated for the hours they work over 40 and the evidence shows that store managers routinely work significantly more than 40 hours a week," he says.

Chotiner's firm, Shapiro, Blasi, Wasserman & Gora, has just received conditional certification for the case. The court has ordered Starbucks to submit a list of all current and past store managers from every Starbucks in the country by May 11 dating back to 2006. "That could be quite a substantial list, possibly in the hundreds and thousands," adds Chotiner.

All of those individuals will eventually receive a notice that will advise them of the lawsuit and provide them with an opportunity to join the lawsuit by signing and completing a consent form and mailing it back.

More Overtime News
The potential cost to Starbucks ultimately depends on how many people end up joining the suit. Anyone who thinks they may fit the class can contact Shapiro, Blasi, Wasserman & Gora. Potential plaintiffs do not have to wait to receive documentation.

Chotiner works exclusively in the area of labor law and has for the last 10 years. "We are very busy at the moment because of the economy," he says, and "many people come to us after being laid off or fired because they are not sure of their rights."