In 2004 Susan started wearing the Ortho Evra patch. She was 18 at the time and was prescribed the patch to help control migraines; her doctor thought she had a hormone imbalance. Her doctor didn't think that the patch would almost kill her… 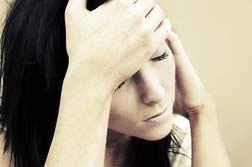 "I was just finishing high school and I was on the patch for 3 months when the migraines got worse," says Susan (not her real name due to a non-disclosure settlement with Johnson & Johnson, makers of the Ortho Evra patch). " I had been in and out of ER with these headaches for about 3 weeks. They did a spinal tap, thinking I had meningitis. Then I had a blood patch and a gamut of tests. I was 115 lbs and went down to 100 lbs—I couldn't eat, I couldn't keep anything down.

"One day I was at school and got a shooting pain up my arm and a ringing in my ears. This time my doctor ordered an MRI but the results were going to take a week. My mum thought I was going to die; she phoned the doctor and begged him to admit me to hospital (my mum is a nurse) but I didn't want to go so instead I went to ER.

I was so dehydrated it took about 30 minutes to find a vein for an IV. My mum called the MRI tech and cried on the phone—he called back that night because my mum sounded so desperate. We got the results the next morning.

'You need to bring your daughter into hospital immediately,' the neurologist told my mum. He sat me down and said, 'We don't want to scare you, but you are going to be admitted to ICU today.' At that time he didn't tell me anything, he just knew something was wrong.

So now I am in ICU and my mum is with me the entire time. They tried to get an IV in me but it was almost impossible, even worse than the last time. Trying to get a pic line inserted was really awful. I got another MRI and they found a 6"- 8" cerebral venous thrombosis—it was in the crown of my head and went all the way down and wrapped around the right side of my jugular vein.

When the neurologist explained this to me, I didn't really know what was going on, I was half-dead. I was very sick as a child; I'd had arthritis so they considered it might be related, but they found nothing. I have no clotting factors.

When all this was happening, my Ortho Evra patch prescription had run out, so I wasn't wearing the patch when I was admitted, thankfully. They knew I was on the patch—one of the first things asked in ER is, 'What meds are you taking?' Keep in mind this was November of 2004 and not much was known yet about the side effects of the patch.

My doctor said he couldn't find anything that would cause a blood clot this large in my brain and to have two strokes. Even a gynecologist tested me. Then he said, 'We believe it was caused by the Ortho Evra patch.'

Six months later I still had the blood clot and I was on two kinds of blood thinners. They even considered sending me to UCLA to remove the clot but determined it was too risky.

My mum started doing research online and found other women who had the same problems with the patch. She found out about the 19-year-old who died on the subway; she found out about the mother in ICU and their kids couldn't touch her—she died as well. And the African-American quadriplegic woman who had a stroke after being on the patch for 12 days. And a 12-year-old girl died.

Women had clots in their brains, in their legs. My case was more severe than most, having a clot in my brain and lungs.

I am only 23 and don't know the long term effects of Ortho Evra. Am I able to have kids? Can I carry a baby to full term? This type of blood clot is found in women after giving birth so it is scary. What if I get pregnant? Even though I have no clotting factors, I am at risk. I think Ortho Evra took so much away from me. I even got addicted to pain killers—I was on oxycontin and also methadone because I was in so much pain with these migraines—I had them every day of my life. Then I got two clots in my lungs from the pic line they put in my arm.

Now my headaches are not so severe but it has been a battle and I've had to fight for my life. I am lucky to be alive; I think if it wasn't for my mum I wouldn't be here—I don't think I would have fought so hard.

More Ortho Evra Patch News
I believe the patch should not be on the market. I think a lot of doctors aren't prescribing it anymore because there are safer alternatives and I am surprised that Ortho Evra hasn't pulled their product. Does the black box warning protect them?

My mum found an attorney for me and helped me win a lawsuit. I am fortunate, many women aren't. We filed a suit just a few months after I got home from the hospital.

I have met so many women who were on the patch and they don't realize that you only have 2 years to sue: a lot of women don't have health insurance and don't have time to figure out what happened. I feel sorry for them. My friend got a blood clot from wearing the patch but she wasn't able to sue Johnson & Johnson because of the statute of limitations. I urge any woman who has worn the patch and suffered side effects such as a blood clot to get legal help sooner than later.