Ortho Evra Patch Victim: I Want to Warn Others

Gillian was prescribed the Ortho Evra Patch in November, 2006 and was told there were no risks to her. "My doctor said that with hormonal contraceptives there was a risk of blood clots but with my family history, I would be fine," says Gillian. Her doctor was so wrong.

"On January 16 of this year, I had sharp stabbing pains in my chest; it happened right after dinner while I was watching TV," she says. "I thought it could have been gas but it didn't go away. I was really worried because these sharp pains were throughout my chest. I called my doctor the following day and saw her that evening. I asked her if I was having a pulmonary embolism because I had read about the Patch online. 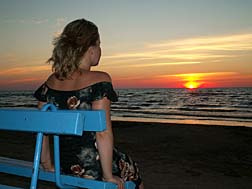 But the chest pains continued intermittently and I began to get a 'creaking' sensation -- like an old door opening -- in the bottom of my right lung. The following week the sound got so loud that friends at work would put their hand on my back and feel a vibration.

I went back to doctor and this time she thought it was pleurisy. I got an x-ray and was prescribed steroids and antibiotics. The x-ray results showed a precipitate in my lung. They said it was consistent with pneumonia and gave me yet another antibiotic. I felt so bad that I couldn't breathe lying down so I took a week off work and spent the entire time in a chair. My doctor prescribed pain killers and while on those meds I noticed a pain in my right calf and realized it must be bad if I felt any pain with all the meds I was taking.

My aunt is a supervising nurse at a hospital so she was keeping tabs on me. She thought I should go back to my doctor and get it checked out -- when she found out that I was on the Patch she thought it might be a blood clot.

The pain had moved up to my thigh. I asked my doctor for the second time if it was a blood clot and she said it was probably a pinched nerve. Her reasoning was that if I had deep vein thrombosis (DVT), my leg would be swollen and red. I didn't have those symptoms but I couldn't walk.

My aunt told me to mark an 'X' on my leg where it hurt the most so we could see if the pain was traveling. By the end of the weekend it moved up my leg two inches and on Monday my aunt told me to request an ultrasound. I had no luck with my doctor so I went to ER.

When I got to the hospital I explained the chest pains and showed the markings on my leg and told them I was on the Patch. I had a three-foot long blood clot going from my calf to the top of my inner thigh! I also had a CT scan to check my lungs and I had multiple pulmonary embolisms scattered throughout both lungs. When they told me I almost felt relieved because I finally knew what was wrong with me. But I was afraid to go to sleep.

I was in the hospital for five days. I had to remain still the entire time and I had an IV and a clot-busting drug injected into my stomach. It really hurt, especially because I am really skinny. Now I am on blood thinners and I have lost about 10% of my lungs: That creaking sound was a dead space in my lungs. And I am only 24.

Once I got home it took about a month for the chest pains to subside. At first I didn't want to pursue legal action but after talking with my aunt I felt that it would be something worth looking into.

More News
It makes me really sad to know that the Ortho Evra Patch is still prescribed. Since I got home I found out that there are two other people I know of that have experienced a blood clot from the Patch: One is a few years younger than me and the other is the same age. I am getting in touch with one of the girls through facebook.com. And there is also a group on myspace.com called Ortho Evra Awareness -- girls who had issues with this drug. One girl had a stroke and lost her peripheral vision.

I am amazed that I experienced problems for so long and didn't die. But I am still concerned for two reasons: last summer I went hiking in the mountains for the first time and loved it; it was a real challenge but because of my diminished lung capacity I wonder if I could ever do it again. The second reason is that my NEW doctor has talked to me about complications if I get pregnant; with a history of clotting it is dangerous. That is a big concern.