"Ortho Evra Patch Put Me into the High Risk Category"

"I started wearing the Ortho Evra Patch in November, 2006 and just a few months later, I had sharp chest pains," says Gina. "I was so worried that I called my doctor; at first she thought I had pneumonia or pleurisy—was I misdiagnosed."

By March Gina couldn't even breathe lying down; she could only sleep by sitting in a chair. "It was a really bad time," she recalls. "I spent so many sleepless nights and cried in pain, and I was scared. I was only 23 and just out of my parent's home. Although I was living with my boyfriend, he had no idea how to help besides trying to make me comfy. 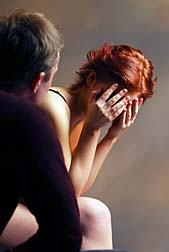 My lungs had started creaking when I breathed in and out, like an old door closing shut. My friends could put their hands on my back and actually feel vibrations. I told my doctor to do the same. Needless to say, I have a new doctor. Luckily my aunt is a nurse and she found out how sick I was. She started to keep tabs on me and put two and two together.

I had started to get a pain in my leg—I was already on painkillers to help the pain in my lung. But now I was limping and could barely stand on my leg. For me, it happened in reverse, where the chest pains came first. My heart would start racing when I got up and I would get out of breath walking. I also started to get faint. My aunt suggested I go back to my doctor and ask if I had a blood clot. She said no.

Then my aunt said I should ask for an ultrasound. Again, nothing happened so my aunt took me to emergency. I had drawn a map on my leg where the pain hurt because it seemed to be traveling up my leg. They ordered an ultrasound and found the clot: it went from my calf all the way up to my thigh; it was almost three feet long.

Then they did a CT scan of my lung. I had a spattering of multiple pulmonary embolisms and dead spaces.

Although I knew that I was in danger, at the same time I felt relieved to finally be in good care and the problem was recognized. In hospital I was still in a lot of pain but the most terrifying part was leading up to the hospital, not knowing. I wasn't so scared anymore.

I was in hospital for a week. My aunt was furious with my doctor—they had quite a conversation and my mum had a lot to say as well. I was on blood thinners for months after that and the situation is considered to be resolved but whenever I get stressed out or upset I get a pain in those same places in my chest. I have had repeat CT Scans that show the same old scars and they still flare up from time to time.

I am not allowed to take birth control pills or any kind of oral contraceptive ever again. I was tested for factor 5 leiden – a genetic predisposition to clotting—and it was shown that I have it. The hematologist told me that if this was known, I should have never been given the patch. It would have been a guarantee that I would get a blood clot.

I think everyone who is considering the birth control patch or pill should be tested to see if they are predisposed in any way to blood clots.

More ORTHO EVRA News
I realize those tests are expensive but the patch is so dangerous—one test would be a lot cheaper than the medical bills from a blood clot. And worse. And now I will never qualify for independent health insurance. I was hoping that I could be a freelance graphic designer but that won't happen unless I am married to someone who has health insurance; having had a blood clot puts you into the high risk category.

This has hurt me so financially, being in my 20s, away from my parents. I had to take a few weeks off work but ultimately quit because I couldn't deal with the stress of my physical problems. What made matters worse was that, even though my doctor had prescribed the patch, it didn't seem to occur to her that I could have a blood clot. It is very upsetting to think about how long I walked around with that—I was a walking time bomb.

I want to say this to the drug maker: it is too dangerous to continue dispensing the patch. Too many young people at the prime of their life have been hurt and some have even died. You have to get the message out and tell everyone how dangerous it is.