"I was a walking Time Bomb on Ortho Evra"

Countless women have suffered blood clots, stroke and even death caused by the Ortho Evra patch. According to Elizabeth, the pill isn't any safer. "My life could have ended if I continued taking the Ortho Evra pill," she says. Elizabeth suffered a pulmonary embolism, a common yet life-threatening condition. 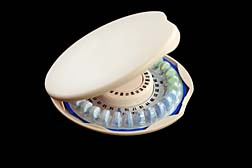 Almost three years ago, Elizabeth was diagnosed with pneumonia and admitted to hospital. As luck would have it, the doctors suspected something from her chest x-ray and ordered an MRI. "They found a significant blood clot in my left lung," says Elizabeth. "The doctor said I have some news for you: you are not leaving the hospital anytime soon. I was terrified.

"They knew I was on the ortho evra pill because they asked what meds I was on during the intake. Because of my age (34) and because of my overall good health, they deducted that the most likely cause of the blood clot was from taking the birth control pill. They never said this was 100 percent, definitely, the only reason. But they said it was the most likely cause and I have to discontinue it as of yesterday and never take birth control pills again. And I am never, in my later years, to take hormone replacement therapy…Menopause is not something I look forward to but now I will have to suffer through it no matter what.

Not only was I terrified with the diagnosis; I was absolutely shocked. There is no history of blood clots or embolisms in my family. I was in the hospital for a week and received IV heparin to thin my blood. I was discharged with self-administered injectable Lovenox and coumadin, both blood thinners. (I had to show them in the hospital that I was able to inject myself.) I took coumadin for about six months and had to be very careful not to cut myself—luckily my knife skills are very good: I am a personal chef so I really had to be careful about any nicks or scrapes.

When I got out of the hospital I talked in depth about the pill with my family doctor. He concurred that this drug caused my blood clot. This really threw a wrench into my life because I have polycystic ovaries, so being on birth control pills was the only thing that kept me from ovulating and kept me from having excruciating pain that I went through every month before I took the pill—it kept the cysts from getting aggravated or even forming.

Now I just deal with agonizing pain every month during the time just before, during and after ovulation—about 10 days. Now I suffer and use condoms and I'm very careful. I don't worry about getting another blood clot because I do believe the pill caused it. I have had x-rays and MRIs since and nothing has ever shown up like that. But when I give someone my medical history, I tell them I had a pulmonary embolism three years ago and they are always thorough; I get a chest x-ray even if my problem has nothing to do with a potential blood clot.

I've noticed that commercials on TV have become more prevalent regarding the possibilities of women forming blood clots on the pill and the patch. Just recently, I've heard it more than any other time in my life and I believe it is because women are dying and they are finally finding out why!

And these TV commercials are from the drug makers, warning women about the risks of clots. I think to myself, isn't that interesting, I wish I had this information years ago: I have no idea how long I was walking around with that clot in my lung like a time bomb. They found it on Christmas day—that was a big gift. If they didn't find it, it could have traveled at any given time and I would have had no control over it.

More ORTHO EVRA News
I want to stress to other women how important this statement is: I had no pains in my legs or chest with this blood clot, I had no idea. I came so close to death. If you are on the ortho evra pill or patch, don't wait until you experience pain: ask your doctor to get tested to see how your blood is clotting and how quickly your blood clots.

I'm not looking to cash in on anything, this happened to me more than three years ago. I am so grateful to be alive and that they found the clot in time. But I am angry about how little information was advertised by the maker and/or physicians regarding the risks of blood clots 3-5 years ago, even 10 years ago.

Now there is more press and I am glad of that, but I hope it isn't too late for a lot of women. Doctors need to inform women of this risk, not side effects such weight gain or nausea. The drug makers and the medical community seem to leave out this important piece of information: the ortho evra pill or patch can kill you!"