Carlie considers herself lucky to be alive. "The doctors in emergency said I was the youngest person they had ever heard of with a pulmonary embolism," she says. "And then they asked me if I was on birth control. I had been on the Ortho Evra Patch and they told me to take it off immediately."

Her chest had been hurting for about a week but she didn't think much of it—Carlie was only 15 years old. But on New Year's Eve of 2005 Carlie had shooting pains in her chest and she thought it was a broken rib. The pain got worse and the next day her father drove her to emergency. 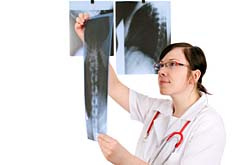 "I had tons of x-rays and after several hours, they told me that I had a blood clot in my left lung. When I told them I was taking the patch, they were shocked because I was only 15. After the doctor told me to take it off immediately, he said it was very dangerous but I was so young that I can't remember exactly what he said or why. My family doctor had prescribed the patch and my parents knew—we all agreed that it was better than getting pregnant.

I was admitted into the hospital for a week. I was even more scared because the doctors were so worried. My parents visited every day and they were almost as scared as me. I knew what a blood clot meant but I had no idea about any other medical terms, including pulmonary embolism. A cranky nurse told me that it could kill me and I was lucky that I wasn't dead.

During that time in hospital they put me on lots of pills including a blood thinner and I got lots of injections, including an injection in my stomach every day. And lots of morphine. They wanted me to move around to keep the blood flowing. They wanted me to get some exercise so I had to change my own bedding--I should have been on the payroll (kidding). And I had a lot of blood tests.

I thought about my life a lot that week. All I wanted was to go home and live a normal life again. But that wasn't going to happen right away. I had to rest and couldn't go back to work or school for a month. All I did was watch TV and stay inside; it wasn't much fun and I couldn't hang out with my friends.

I saw my family doctor about a month after I got home. We talked about birth control and he suggested an injection once a month. I said no more drugs, no more anything. I'm not really worried about STDs because I have had the same boyfriend for more than four years and for birth control we use condoms. I was on blood thinners for six months and I am getting more active. I gained some weight when I stayed home but I am getting back to normal.

I chose the patch because it was easy to use. It was easier to remember than taking the pill and having to stop for a week and going back on it again. After this happened to me I don't want to take any drugs ever again. I would rather use natural remedies than put chemicals in my body.

We have an insurance policy through work and I applied but I was denied life insurance because I had the blood clot. The insurance company wanted to know if I was on the Ortho Evra Patch or if I had ever taken it. I told them that I was only on it for three months but even for that short amount of time, I have been disqualified. My mum is going to look into other insurance plans.

When my mum found out that I was denied insurance, she went online and looked up the Ortho Evra patch. Then she found LawyersandSettlements and we were both shocked when we found out how many other women had suffered blood clots and stroke. Some women have even died and I am surprised that I didn't. I consider myself lucky. Still, why didn't anyone tell me how dangerous the patch is?"