Women who have worn the Ortho Evra patch have reported a gamut of side effects—from heavy periods and headaches to DVT (deep vein thrombosis) and stroke. Not one of the following women were aware of the risks associated with the patch—they were not told of the potentially deadly side effects and had no idea they had put themselves in danger by using Ortho Evra birth control. 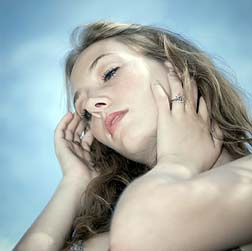 Fortunately in Karen's case, she stopped using the patch a couple months ago after complaining to her gynecologist. " I had terrible cramps due to the blood clots; at times it was so hard to sit and I could not even drive because it hurt so badly," she says. "I also endured terrible headaches daily, that even Motrin or Tylenol could not relieve. I was only on the patch for a few months; my doctor did document my complaint and he changed my medication to the birth control pill."

Two years ago, Alice was in her late twenties when she was prescribed the Ortho Evra patch, the year she had a mild stroke. "Everything was fine with me until I wore the patch," she said. " One day I couldn't read my school work because I was having severe migraines; they were so bad that I went to the hospital. By the time I got to ER, the whole left side of my face looked like I had Down syndrome--I couldn't feel the left side of my face or body. I suddenly fainted and lost all control over my body actions. When I came to, the doctor had taken the patch off me and ever since then my migraines stopped. Needless to say I haven't lost control over my body since then. It has been more than two years since this incident, but my doctor said I can't take any form of oral birth control and definitely not the patch because it may cause me to have another stroke."

Sylvia (not her real name) was wearing the Ortho Evra patch and got a blood clot in her leg. " After being diagnosed with the blood clot I was out of work for a while and couldn't do much," she said. "The doctors told me to stay off of my feet due to the fact that the blood clot could travel to heart—I was terrified."

"I started using the Otho Era patch about 3 months ago," said Lucinda. "Just a few weeks ago I began having severe pain in my right leg. An x-ray was done and it revealed a mass the size of a quarter in the back of my knee. The doctor thought it was a cyst so he scheduled an appointment with orthopedics. The appointment was a month away and my leg got worse so I went to the ER. I found out that the mass was actually a blood clot but by then it had moved into my lungs." Lucinda recently was released from hospital but a nurse comes to her home ever day to give her an injection of a blood thinning medication. "I am no longer going to be able to keep my job in the army despite the fact that I just re-enlisted—I can't do any physical work. I am not even capable of keeping up with my two-year-old son anymore."

What happened to Elizabeth is also frightening: "After wearing the Ortho Evra patch for just one cycle, I developed a DVT in my right leg, which shed many little clots, resulting in several clots lodging in my lungs," she said.

Roberta suffered a pulmonary embolism while using the Ortho Evra patch. " I used this birth control patch from 2003 until October 2004, when I suffered blood clots in my legs and a pulmonary embolism," she said. "I was hospitalized for more than a week, and had to take blood thinners in order to prevent more clots from forming. My doctor says that I may not be able to use any hormonal birth control—ever again--because of my injuries."

More ORTHO EVRA News
On July 25, 2005, a group of ten women between the ages of 18 to 47 filed a lawsuit against the pharmaceutical company Ortho McNeil and its parent company, Johnson and Johnson. The suit alleged that the Ortho Evra birth control patch is "defectively designed" and "unreasonably dangerous" because the company failed to tell doctors that Ortho Evra exposed women to high levels of hormones that may have caused dangerous side effects. The Ortho Evra Patch has been on the market since 2002 and complaints have been reported since that time, but it took until November 10, 2005, for Ortho-McNeil Pharmaceuticals Inc. to revise the Ortho Evra patch warnings, prompting a surge in litigation against it.

Now, Johnson & Johnson is making large monetary settlements--without going to trial--with women who allege that they were harmed by Ortho Evra. As of October 2008, the company has paid at least $68.7 million to settle lawsuits filed by hundreds of women who suffered blood clots, heart attacks or strokes after using the Ortho Evra birth control patch.