Hives, blood clot and breast cancer: was it from the Ortho Evra Patch ?

Teresa woes the days she wore the Ortho Evra Patch. Back in 2004 her ObGyn prescribed the contraceptive, right after she had a physical. But 3 days later she broke out in hives, called the nurse and she was told to stop using the patch—it had caused an allergic reaction. But Teresa says it caused a lot more than hives…

Let's back up for a minute. Teresa had two complete physical exams before she took the patch; one in January and another in February, after she had a miscarriage. She had a clean bill of health. 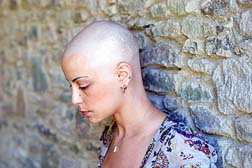 A few weeks later, her hives had gone but this time she found a lump on her left breast—she had worn the patch on the underside of her left arm. "I went back to the doctor and he thought it was a cyst," says Teresa. "He did a biopsy and it turned out to be cancer.

"I started chemo and radiation in May, 2004 just 3 months after I had worn the Ortho Evra Patch. There is absolutely no family history of breast cancer in my family, or for that matter any cancer. I am 34, active and healthy and I don't smoke. This breast cancer came right out of left field—I was 29 at the time. When I had my physicals in January and again in February I didn't have this cyst so I can't think of any other reason than the Ortho Evra Patch to have caused this cancer.

Right before my first session of chemo, I had an ultrasound and they discovered a blood clot in my neck. As if the cancer wasn't enough to worry about! I was given Heparin injections right away and started a course of coumadin. Nobody asked me if I was taking birth control; nobody explained to me how I could have a blood clot in my neck. Now I know it is a side effect of the patch—I saw it on TV.

I had surgery to have the tumor removed and so far I am fine. But I can't take any more contraceptives—not the birth control pill and certainly not the Patch. When I was in the hospital my chemotherapist recommended that I never take the patch or birth control pills again. He explained that 'Taking birth control is not one of the things you are allowed to do because too much estrogen could bring another onset of cancer because you have already had cancer,' he explained.

I am so fortunate that it wasn't invasive and I am alive today. Maybe getting those hives saved my life; if I had stayed on the Patch any longer…"

According to FDA product labeling, women using the Ortho Evra patch are exposed to about 60 percent more estrogen than if they were using typical low-dose birth control pills. Increased levels of estrogen may increase the risk of blood clots, which led the FDA to add warnings to Ortho Evra's labeling.

More ORTHO EVRA News
When Johnson & Johnson's patch was placed on the market in 2001, it said that it would be preferable to a pill because it would provide lower and more stable estrogen levels, and would be easier for women to take.

Now, studies have shown that only the company's last claim was true, and the patch exposes women to up to 60 percent more estrogen than the pill, and a variation in hormone levels anywhere from 1.2 to 3.5 times higher.

Public Citizen, the national, nonprofit consumer advocacy organization says that improved compliance is not enough of a benefit to outweigh the serious risks that have emerged. How many more women will suffer before this drug is removed from the marketplace, once and for all? After all, there are other forms of birth control to use that pose no health risks. But maybe there isn't enough profits involved.