Ortho Evra—Out of Court, Out of Mind

Despite the fact that Johnson & Johnson recently paid the seemingly staggering sum of $68.7 million to settle lawsuits brought by young women who nearly died using their Ortho Evra birth control patch, this dangerous contraceptive device remains on the market and is still causing damage. 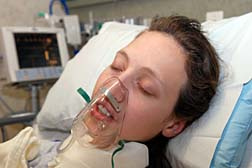 Case in point: a young woman in the southern US who was hospitalized for a stroke just a year after starting on the patch. She wasn't even 30 at the time. She's lucky—she survived and did not sustain brain damage or any permanent disability. And we're lucky because we heard of her story. And this is key, because while it may seem all fine and well for J&J to fork up vast sums of cash for out of court settlements, it means those women's stories aren't being told. And the benefit in telling women's stories is that they may prevent other women from suffering the same kinds of fate and help doctors personalize the statistics.

Don't kid yourself—blood clots, stroke and heart attacks induced by the Ortho Evra patch are not rare medical events. A recent study published in the Journal of Obstetrics and Gynecology sought to determine just how frequently women using 'transdermal contraceptive systems' actually did suffer venous thromboembolism, acute myocardial infarction and ischemic stroke. The researchers compared the event rate with that of women taking oral contraceptives. They found that the risk for blood clots doubled in women using contraceptive patches compared with those taking pills.

More ORTHO EVRA News
If so few women's stories actually get heard by the media and physicians, because it is far better for J&J to settle with as little attention as possible, studies like this may be one of the few ways in which physicians can determine just how many of their patients are affected. But this may result in a lack of connectivity with the issue—which in turn may affect prescribing patterns.

Results from a study by the Center for Innovation in Pediatric Practice, The Research Institute at Nationwide Children's Hospital in Ohio, found that the Ortho Evra patch and another, oral form of birth control, accounted for a steadily increasing proportion of contraception prescriptions for 11- to 21-year-old females between 1993 and 2004. Yet the dangers of the Ortho Evra patch were known in 2004. An 18-year old girl died in 2004 because of an Ortho Evra patch-induced blood clot.

So, all in all, it would seem that there is a price to pay not only for using the patch, but also for staying silent about it. And that silence is what J&J is banking on.