In November 2002, Tracy admitted herself to hospital with what she thought was either a migraine or the flu. She had been suffering from terrible headaches for several days. In fact, she had a blood clot in her brain, caused by the ortho evra birth control patch. 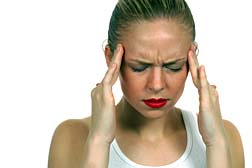 Tracy had only been on the ortho evra patch for two months, but during that time she did experience some signs that all was not well. "I had really horrible headaches," she said. Then several days before she went to the hospital Tracy started vomiting. "I assumed it was the stomach flu because everyone was coming down with a flu that involved headaches and vomiting. After 48 hours of throwing up, and I had started slurring my words, my mother suggested that I go to the hospital. I waited in triage for five hours, but I kept throwing up. When they finally saw me, the doctor on duty shined a light in my eyes and ordered a CT scan."

Tracy's CT scan revealed bleeding in the brain — and the doctors assumed at that point that it was caused by a blood clot. "They did an MRI and the MRI revealed the clot — which thankfully was in a vein, not an artery. This is a very unusual place to have a blood clot. They usually form in arteries, which is far more dangerous because they lead to your organs. But veins carry blood away, and they are smaller than arteries. So to have a blood clot in a vein in my head was really unusual." In fact Tracy had a blood clot in her right transverse sinus. You could say that she was very lucky, in a perverse way.

The doctors put her on a blood thinner to reduce the clot, and a diuretic to release the pressure in her head. "I also had pin point haemorrhages on my optic nerves. And some strange visual phenomenon," she said. She was hospitalized for two weeks.

More News
The weird thing is that it was my off week. And I had decided to stop using the patch because it made me feel a little crazy; my mood swings were much worse. And aesthetically, it would get quite nasty around the edges--like a band aid. It looked gross," she said.

Tracy was just 25 when this happened. "I wanted to come forward with my story earlier — but I wasn't able to do so until recently," Tracy said. When she did, Tracy was contacted by a lawyer, through Lawyers and Settlements. "She was wonderful, but it appears that my statute of limitations has expired. So I just took a little too long to get around to it."