In the wake of the Opioid Epidemic now declared a national emergency, big Pharma faces a tsunami of litigation. Miami has just announced it may file a prescription opioid lawsuit against the manufacturers, adding to the long list of cities and municipalities that have declared an opioid crisis. 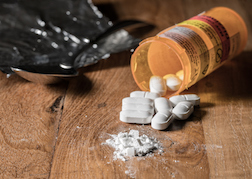 This June, the New York Times wrote that 64,000 people died from drug overdoses nationwide in 2016, up from 52,000 in 2015. These numbers make drug overdoses the leading cause of death in people under the age of 50. Given that more than 30 states, cities and counties have either filed lawsuits or are formally recruiting lawyers in the prelude to litigation-- according to a Financial Times analysis, the amount of legal action—and subsequent settlement-- has been likened to that of the $2 billion paid by the tobacco industry back in 1998. And big pharma has deep pockets.

Delaware County was the first county in Pennsylvania to sue the makers of addictive painkillers.The Inquirer reported that Delaware County had logged 145 opioid-related drug deaths since the beginning of 2017, and police officers in the county had saved more than 877 lives using the overdose-reversing medication naloxone (more about that below). The drug manufacturers named in the lawsuit include Teva, Janssen, Endo, and Purdue Pharma. “We are tired of going to funerals of children of our friends because pharmaceuticals are giving them medications they know are addictive,” Dave White, co-chair of the county’s Heroin Task Force, told philly.com. And attorney Robert J. Mongeluzzi said that, “The opioid manufacturers in their relentless pursuit for profit created disinformation to hoodwink and convince doctors that opioids weren’t addictive when they were…”


Meanwhile, drug companies are fighting back. The Associated Press (Sept. 27) reported that drug companies have asked a judge to dismiss a lawsuit filed by Oklahoma's attorney general accusing them of fueling the state's opioid epidemic through fraudulent marketing. And the Oklahoman reported that Purdue Pharma, Janssen Pharmaceuticals Inc., Allergan PLC and several other pharmaceutical companies recently filed a brief saying they've complied with the FDA’s requirements to warn the public about potential risks that come with using their drugs.

A spokeswoman for Janssen, in a statement to the Cleveland Plain Dealer called the lawsuit filed by the state of Ohio, "legally and factually unfounded", and that "Janssen has acted appropriately, responsibly and in the best interests of patients regarding our opioid pain medications, which are FDA-approved and carry FDA-mandated warnings about the known risks of the medications on every product label."

More OPIOID EPIDEMIC News
As for Purdue Pharma, it told The Plain Dealer  that, "OxyContin accounts for less than two percent of the opioid analgesic prescription market nationally, but we are an industry leader in the development of abuse-deterrent technology, advocating for the use of prescription drug monitoring programs and supporting access to Naloxone— all important components for combating the opioid crisis."


One could speculate that supporting Naloxone is like “double-dipping”. Naloxone, also known as Narcan, is made by Amphastar, which raised the price of its drug by about 1,000 percent. According to Fierce Pharma, a pharmaceutical-industry news site, the price of one Naloxone dose rose to $41 in January 2015, up from $0.92 a dose in 2005. Cha-ching.

If you or a loved one have suffered losses in this case, please click the link below and your complaint will be sent to a drugs & medical lawyer who may evaluate your OPIOID EPIDEMIC claim at no cost or obligation.
Request Legal Help Now

Posted by
laura raley
on October 25, 2017
AMEN
Posted by
Ed Gadziemski
on October 9, 2017
Nobody seems to be looking at this from the patient's perspective. My wife has rheumatoid arthritis. Oxy for pain plus clonazepam for anxiety and the sleep disorder associated with chronic pain has brought her some relief. Now, however, with "Oxy Madness" sweeping the nation, her doctors are running scared and are reneging on their support for proved treatments. This is disgusting and alarming. Her mental state is deteriorating and she's considering giving up on life altogether. I'm sure she's not the only chronic disease / chronic pain patient suffering.
Posted by
Ruth Bertholf
on October 8, 2017
Iv been taken prescribed opiates since 2002
Posted by
Randy J Becker
on October 8, 2017
The Sackler clan is the largest "LEGAL" drug dealers on the planet. They started around the late 90's to early the 2000's by testing different types of Oxy's in small towns in Kentucky. The whole town became addicted to Oxy's. Then in early 2000 in Broward county Fl several doctors started opening pain clinics and for $300 you would walk in have your blood pressure taken and then you would be handed 120 80mg Oxycontin 240 30mg Oxy's 120 1mg Xanax and 100 40mg methadone disks then they would send you to there pharmacy and for under $200 you would fill it. Then when they knew you were addicted to the Oxy's the price went up from .30cents to $4 to $6 dollars each. The Sacklers are worth 14 billion dollars and they did this in 10 yr's they even had the Governor of Florida in there pocket because he waited approx 5-7 yr's to set up the monitoring system that would of stopped this a long time ago. I knew people that had 5 doctors they were seeing every month and getting the same prescriptions but the government turned a blind eye. If the pharmacy system was in place I wouldn't have lost 5 friends to overdosiing on oxy's and xanax. I don't know if anybody went to sleep and then woke up and went in to the kitchen a saw my best friend standing up leaning against the cabinet dead.
Posted by
Frizz
on October 8, 2017
Let it destroy suburbia like they did with crack in the inner cities,opiods=epidemic,crack=jail