Fed up with a deadly and costly drug addiction epidemic Ohio has become the second state after Mississippi to launch a lawsuit against five major pharmaceutical companies that manufacture and market prescription opioids such as OxyContin, Percocet and Vicodin. 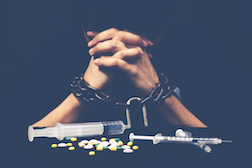 Between 2000 and 2015 drug overdose fatalities in Ohio increased by 642 percent. That equates to 8 deaths a day or one every three hours. In 2014 and again in 2015 Ohio had the greatest number of deaths from synthetic opioids in the US.

Ohio estimates it has 200,000 opioid addicts – that’s about the same number of people who live in Akron, Ohio.

“Ohio has been hit very hard by the opioid epidemic,” says Dan Tierney, spokesperson for the Office of the Attorney General of Ohio in Columbus, Ohio. “Specifically we have had very large issues with heroin, synthetic opioids such as fentanyl and carfentanyl. The lawsuit alleges, and the evidence will show, that the marketing of the drug manufacturers was misleading and designed to change the culture so that more opioids would be prescribed.”

Opioids once were considered only appropriate for acute short-term pain management in post-surgery situations or for use by palliative care patients. But by the late 1990s, the lawsuit alleges, the drug industry was working hard to change those ideas and was positioning the use of opioids as a suitable option for management of chronic pain.

It used that message to crack open a huge new market for painkillers.

The 107-page statement of claim is a detailed, evidence driven indictment of the pharmaceutical industry’s alleged role in America’s devastating opioid epidemic.

According to the documents, prepared for the Office of the Attorney General of Ohio by four leading law firms from across the US, the drug industry “spent, and continues to spend, millions of dollars on promotional activities and materials that falsely deny or trivialize the risks of opioids while overstating the benefits of using them for chronic pain”.

Specifically, contrary to labels on the drugs, the Defendants downplayed the risk of addiction, promoted the idea that “signs of addiction should be treated with more opioids and claimed opioid dependence and withdrawal are easily managed”.

At the same time, according to the court documents, the Defendants “touted the benefits of long-term opioid use, including the supposed ability of opioids to improve function and quality of life, even though there was no “good evidence” to support Defendants’ claims.”

When the state made it harder to get prescription opioids by shutting down so-called “Pill Mills” and revoking the licences of over 100 doctors the decrease in opioids tripped another kind of drug epidemic.

“A very common profile of a heroin user is someone in their mid-thirties who had a work or sports injury, someone with a back injury who was prescription opioids for chronic pain and then when the prescription ran out they moved to heroin because it was cheaper and more accessible,” says Tierney.

The lawsuit claims that the flood of opioid drugs has caused the state of Ohio to spend millions and millions of dollars on health care for drug addicts, foster care for the children of drug addicts, increased crime prevention and law enforcement, drug addiction counselling and emergency services and more.

"This lawsuit is about justice, it's about fairness. It's about what is right," Ohio Attorney General Mike DeWine says, "It is just and it is right that the people who played a significant role in creating this mess in the state of Ohio should pay to clean it up."

More Opioid epidemic News
The lawsuit maintains that the drug makers knew or should have known that opioids were highly addictive and they purposefully underplayed the risks of using opioids simply because of corporate greed.

It also claims the Defendants’ unlawful promotion of opioids caused “substantial economic damage to state agencies and has caused and continues to cause significant harm to the community” and “that the harm opioids do far outweigh any offsetting benefit.”

“We seek a number of remedies and certain reimbursement for the costs to our state, but we are also seeking, under the public nuisance claims, that they stop the misleading advertising and correct the statements they’ve made,” says Tierney.

Tierney says the State of Ohio is doing many things to fight opioid addiction. The lawsuit is just one part of the fight.

If you or a loved one have suffered losses in this case, please click the link below and your complaint will be sent to a drugs & medical lawyer who may evaluate your DRUG and MEDICAL claim at no cost or obligation.
Request Legal Help Now