A federal lawsuit filed recently over a popular diabetes medication claims that drug manufacturers failed to warn consumers of heart attack risks associated with the drug. 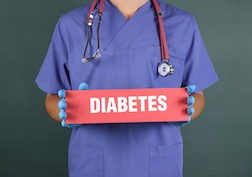 Chester claims that he suffered congestive heart failure, heart failure and hypoxic respiratory failure, a condition where there is not enough oxygen in the blood, after he took both Onglyza and XR (saxagliptin and metformin extended release) between 2010 and 2015, according to the complaint.

The FDA approved Onglyza in 2009 "to improve glycemic control in adults with type 2 diabetes mellitus," according to the FDA approval letter.

"Studies have come out recently that suggest that patients who take this medication are at risk for heart failure and then death," says Dr. Malik.

Saxagliptin, which is an active ingredient in Onglyza, has also been linked by the Food and Drug Administration (FDA) to heart attack risks.

The FDA in April 2016 issued a drug safety communication, adding warnings about heart failure risks to labels of type 2 diabetes medicines containing saxagliptin and alogliptin, which are part of the class of dipeptidyl peptidase-4 (DPP-4) inhibitor drugs used with diet and exercise to lower blood sugar in adults with type 2 diabetes.

More ONGLYZA AND KOMBIGLYZE XR News
"Type 2 diabetes medicines containing saxagliptin and alogliptin may increase the risk of heart failure, particularly in patients who already have heart or kidney disease," the FDA wrote in its warning. "Heart failure can result in the heart not being able to pump enough blood to meet the body’s needs."

"Some diabetics have heart disease, and heart disease can be worsened by taking this medication," says Dr. Malik. Patients who have developed increased congestive heart failure or died may have a claim against the drug manufacturer, he says.

Posted by
Dorothy Murphy
on November 4, 2017
I dorothy murphy suffer with type two diabetes and the drug meformin 500 milgram cause me heart failure and heary aytack I wine ip in west suburnban hospital here in chicago sept 17 2013
Posted by
Willa Rhodes
on June 12, 2017
I was on metformin and lanus for about 10 year, then they took me. Off medformin
Posted by
Ronald bible
on April 2, 2017
My husband had a complaint for metforman, and went to everyone for help at Kaiser and no one would help, and now he died from liver cancer 2 mo ago. He was fine till he got put on metformin and then the Dr that put him on it no longer could.be reached