Texas Gas and Oil Fields No Place for Kids

Who could tell what may have caused the explosion in a Texas oil field in April of last year. Oil and Gas can be a dangerous combination at the best of times. But it seemed pretty innocent enough to be sitting on an oil field tank battery on a crisp spring day with a companion, until a sudden explosion propelled 24-year-old Joseph Crisp into the air and 180 feet into a wooded area. 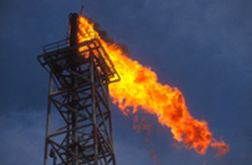 His companion that day, Melissa Helsel-Williams—also 24—died at the scene. Her body was later found under some metal debris.

At the time it was not known what might have triggered the explosion. But something was to blame. An errant spark, perhaps. At an oil field, that's often all it takes.

The oil accident happened at an oil field near the East Texas town of New London. At the time, investigators were speculating that the explosion could have been triggered by something as innocent as a cigarette.

While this was not an oil drilling accident, there are those who suggest this particular accident is of greater concern given that most workers toiling at actual drilling operations are professionals. Not to discount the credentials of Crisp, who was an experienced hand.

However, critics cite concern over storage areas that are often in isolated rural spaces. The Gainesville Daily Register reported last spring that such areas can serve as magnets for teens and youth, who favor the facilities as spots to hang out.

The Daily Register reported that many such installations carry little or no warning signs of danger by oil and gas operators. Most only bear the name of the oil field company and a state identification number.

Crisp was found immediately following the explosion in a wooded area almost 200 feet from where he had been sitting, writhing in pain from his injuries. According to his brother Brian, Crisp had suffered eight broken ribs, a broken neck and broken leg. There was some doubt at the time that he would ever work again at oil and gas drilling.

The Gainesville Daily Register reported at the time that Crisp was lucid enough to inform first responders about his companion. After a search, they found the body of Helsel-Williams amidst the debris.

More OIL AND GAS ACCIDENTS News
The US Chemical Safety Board is attempting to educate America's youth about the hazards of such oil fields. A safety video entitled ''No Place to Hang Out'' is posted at its Web site, and refers to some 40 deaths of children and youth as the result of oil field explosions at sites owned by oil and gas operators. Youths interviewed in the video talk of taking a pack of cigarettes down to the oil fields and hang out with their friends, go over the events of the week, and the like.

They claim to have not been aware of the hazards of potential fumes, at the installations.

In a statement to KYTX TV in East Texas, an official with the Railroad Commission reportedly said that state laws in Texas do not require gas and oil companies to post warning signs in oil fields.

If you or a loved one have suffered losses in this case, please click the link below and your complaint will be sent to a personal injury lawyer who may evaluate your Oil and Gas Accidents claim at no cost or obligation.
Request Legal Help Now

Click to learn more about LawyersandSettlements.com
LawyersandSettlements.com - A trusted, independent legal news provider bringing quality news and information on all legal cases and lawsuits filed in United States of America to its readers since 2002. Over 250,000 legal help requests including Personal Injury Cases, Employment Law Cases, and Workers Compensation Cases have been forwarded to lawyers all across to the country.