Troubling Allegations in the Wake of Gas Accident Explosion

Last week a gas accident at the Kleen Energy plant under construction in Connecticut killed five workers and injured dozens. It was later revealed that welders were working within close proximity to large volumes of natural gas as the gas was being purged. What's more, minutes before the fatal explosion, frantic warnings reverberated through the plant that gas metering levels had spiked. 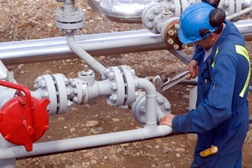 In the days since the February 7 explosion, investigators and eyewitnesses have revealed some troubling occurrences that preceded the blast that reverberated for miles.

According to yesterday's issue of the Hartford Courant, an employee noted a dangerously high concentration of natural gas in the Middletown plant and radioed a frantic message throughout the plant to evacuate.

Speaking on condition of anonymity, both workers and investigators reported to the Courant that the smell of natural gas was so strong inside the main building (where the explosion took place) that some workers complained of dizziness.

There were others who questioned the wisdom of welders actively working with open flames mere yards away from a man-made depression behind the main plant structure into which vast amounts of natural gas was being pumped.

The Courant reports that propane and diesel-fuel space heaters operating in the area could also have triggered an explosion.

The Kleen Energy plant, now closed, is an active crime scene for the purposes of the gas accident investigation, which has been described as a criminal investigation.

More OIL AND GAS ACCIDENTS News
Purging was suspected as the cause within hours of the blast. The purging, which is done to clear debris and other gasses from natural gas pipelines used to feed dual gas turbines and the plant's steam turbine, began at 7 am—five hours prior to the 11:17 am explosion. The last purge just before the explosion forced gasses through pipes that vented into the courtyard area. Witnesses said that welders were working nearby, and there was a diesel-power space heater operating near temporary wooden doors that opened into the courtyard.

An investigator said on condition of anonymity that the wooden doors were not sealed.

One of the men who died was monitoring gas levels in the plant with the aid of a monitoring device. For much of the morning, workers were told that gas levels were at acceptable levels, although some workers opted to believe their noses and left the building.

Both monitoring devices were recovered in the debris following the massive gas explosion. Investigators hope that memory chips inside the devices will reveal levels of natural gas at the time of the gas accident.