Five people have been confirmed dead in the thunderous explosion that rocked a Connecticut power plant Sunday. Church services were just winding down yesterday at 11:17 am when much of the state shook with earthquake force from the blast at Kleen Energy Systems, located 15 miles south of Hartford. 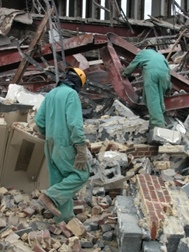 The New York Times reported late yesterday that workers were purging natural gas pipelines in preparation for the plant to open later this year. The effects of the massive explosion were felt as far as 30 miles away.

The blast occurred in and completely destroyed the largest building of the complex, known as the Power Block. Workers managed to cap the main pipe spewing flames just after noon on Sunday. However, rescue workers and officials have said that the search for victims amidst the rubble could go on for days.

As of this morning five people were confirmed dead, although officials had yet to release their names, pending notification of next of kin. More than two dozen were injured. Middletown Mayor Sebastian Giuliano indicated at a press briefing yesterday that the number of dead and injured could change, given the number of subcontractors working at the plant. As many as 200 workers could be found at the plant on any given day.

The official noted that many of the construction workers had been evacuated from the site before purging of the gas lines commenced, according to standard procedure. The cause of the blast remained undetermined, but a natural gas explosion is the "assumed cause," pending further investigation.

Natural gas is the main source of fuel for the plant.

More OIL AND GAS ACCIDENTS News
The plant has been under construction since 2007 at an old feldspar quarry and was 95 percent complete, according to sources. The 620-megawatt plant was destined to supply Connecticut Light and Power and was undertaking testing for a planned spring or summer opening. It was reported that workers from O & G, Ducci Electrical Contractors of Torrington, and Keystone Mechanical Electrical Contractors were at the site on Sunday.

State and local police and several federal agencies were on site to investigate the explosion, including the Occupational Safety and Health Administration, the Justice Department's Bureau of Alcohol, Tobacco, Firearms and Explosives and the United States Chemical Safety Board, which examines chemical industrial accidents. Daniel Horowitz, a spokesman for the chemical safety board, said that a team of investigators would arrive today.