As happens with many multidistrict lawsuits, a class action centered in Connecticut also reaches into Ohio and other states, qualifying the litigation for allegations under Ohio Labor Employment Law. 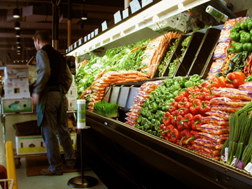 Specifically, the lawsuit alleged that Moran observed an overtime computation and payment protocol designed to stiff them out of a full time-and-a-half rate for hours worked beyond an eight-hour day or typical 40-hour week. Instead of receiving time-and-one-half for those hours worked, the managers alleged they received half-time instead.

The strategy, or so it is alleged, served to save the defendant a lot of money. The irony here is that the division of Moran Foods involved, is the Save-A-Lot chain. The allegation is that in stiffing its assistant store managers, Save-A-Lot…well…saved a lot.

Now, plaintiffs in the case are urging judicial approval of a proposed $4.5 million settlement that would put the issue to bed once and for all, and save a lot of time.

Lead plaintiff Robert Keifer, together with the consolidated class of assistant store managers, submitted a motion to US District Court Judge William G. Young urging him to approve the settlement.

“The proposed settlement is fair, reasonable and adequate and should be approved in all respects,” the motion said. “By reaching a favorable settlement prior to the resolution of dispositive motions or trial, plaintiffs seek to avoid significant expense and delay, and instead ensure recovery for the class.”

According to court records, Save-A-Lot has a history of denying ASMs their overtime pay. In step with a complaint common to other sectors, the lawsuit claims that Save-A-Lot misclassified its ASMs as exempt from overtime pay over a period of years, in an effort to reduce overtime costs.

The misclassification of an employee or job function is a common strategy amongst less-than-honorable employers looking to save a few bucks - or save a lot - and not beyond generating those savings from the backs of their employees.

In other cases, the oversight is borne from misinformation or an honest mistake.

More OHIO EMPLOYMENT LAW News
However, when it happens, the misclassification constitutes an affront to Ohio Labor Laws and similar laws in other states governing the conduct of employers.

The lawsuit was filed in 2012 - first in Connecticut federal court before it was consolidated with similar cases in Connecticut and Pennsylvania. The lawsuit was later expanded to include plaintiffs in Pennsylvania, Illinois, Maryland, Massachusetts, Missouri, New Jersey, New York, North Carolina, Rhode Island and Ohio - qualifying the lawsuit for consideration pertaining to Ohio State Employment, for those Ohio-based class members.

It has been reported that class members - including those affected by Ohio Labor Laws - will gain about $1,800, on average, in compensation. The case is Robert G. Kiefer et al., v. Moran Foods LLC et al., Case No. 3:12-cv-00756, in the US District Court for the District of Connecticut.

Posted by
Trent pike
on November 19, 2014
How much longer until the funds are disbursed?
Posted by
edward ensley
on October 17, 2014
when will the proceeds from the ot lawsuit finally be disbursed? it was documented in the summer as being closed on july 31. and the proceeds to follow 8 weeks later. as of oct. 17 not disbursed.
Posted by
Emad
on October 6, 2014
Has the funds from the Save a Lot settlement been disbursed?