Nursing Home: "Abuse Used to get Residents to Comply"

Some residents who live in nursing homes complain that staff and management at those homes abuse patients. Barbara D. is one such patient. She says that when she tried to help other residents, she was labeled a trouble-maker and forced out of her home. She also says that she was forced to stay at a hotel while she waited for another nursing home to take her in.

"I got in trouble for telling someone that if they didn't like their food they could sign a waiver to get different food, which is their right," Barbara says. "I was told that I couldn't tell people their rights. I'm a vegan and I have to fight for everything I get here. I really had to go to war over that.

"Any time you voice an opinion you get written up for it. You don't have the same rights in here that you have out there. They put somebody on the Alzheimer's floor who was fine on this floor. But they needed room on this floor. They will do that to you if you don't have family to fight for you. Residents have to fight for each other, but many have given up. You get railroaded at times. Your natural inclination is to fight, but that just makes it worse. Some residents have been put in psych wards for fighting for their rights." 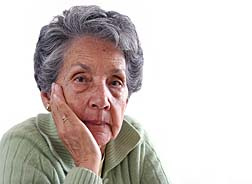 Barbara says she was kicked out of her other nursing home for trying to help other residents. "I was given 30-day notice to leave," Barbara says. "They put me out in a hotel room. I wound up in the hospital from that episode. I had a hard time getting another home because at the first home, they reported that I threw furniture and set fires. That just wasn't true. They also said I would be at the hotel for two days, but I wasn't eating and started getting chest pains, so I had to be taken to the hospital. I was at the hospital for a week.

"I don't want to die in a nursing home. I've watched friends do it and it's terrible. Once you get in these places it is hard to get out. Something has to be done about some nursing homes. They are bad, corrupt and some of the owners are exploiting people to get rich."