In what may be one of the more shocking cases of nursing home abuse, a nurse at a nursing home is accused of raping a partially paralyzed resident. The nurse has also been accused of abusing 13 other residents, although it is likely that number will increase as more victims, and families of victims, come forward.

At least one family has now filed a lawsuit against the nurse and the nursing home, alleging the nursing home should have been aware of the abuse. Furthermore, they allege the nursing home was negligent in hiring the nurse. The plaintiffs say their father has suffered severe physical and emotional injuries. The lawsuit, which alleges the nurse physically and mentally abused the victim, seeks in excess of $175,000 in damages. 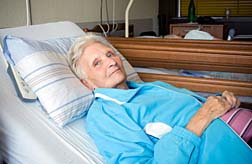 The nurse admitted to abusing around 100 patients since the 1980s. He worked in 13 facilities, including hospitals and nursing homes. According to news reports, many of the nurse's patients could not communicate. However, investigators did verify 14 assaults and are further investigating suspected assaults. Former coworkers of the nurse said that patients had complained about him and some avoided being alone with him.

As investigators learn more, it is expected that more lawsuits will be filed against the nurse and the nursing home. The nurse has been charged with rape and gross sexual imposition.

Meanwhile, Texas Attorney General Greg Abbot has filed a lawsuit of his own against an assisted living center. The lawsuit alleges that the home's manager withheld food from residents, locked some out of their buildings at night and threatened some residents with a hammer. Furthermore, investigators allege the manager forced residents to sleep on metal bed frames without mattresses if they soiled their sheets.

More News
In a different lawsuit, the son of a woman who died in a nursing home has filed a lawsuit against the home, alleging elder abuse, wrongful death, fraud, violations of patient rights and negligence. The plaintiff claims his mother died because the number of staff at the home was reduced to save money. According to the lawsuit, the victim fell three times and suffered a hip fracture. She also developed pneumonia before she died. Although the victim was 97 years old, the lawsuit argues that residents lived in hazardous conditions and were often unsupervised. Furthermore, state investigators previously found deficiencies in the home, which received three citations for patient care in 2006-2007.