A nurse has been accused and sued by a nursing home resident's family for allegedly raping a patient who is partially paralyzed and abusing approximately 13 other patients.

John Riems, a former night shift nurse has been accused by a family for mentally and physically abusing their father. It was when Reims was charged two weeks ago in the rape of another patient that the family became aware that their father might have been a victim of abuse and claim that such suspicions have proven to be true.

Riems, 49, admitted to investigators upon his arrest that, since the 1980s, he had abused approximately 100 patients, but could only remember the specifics on about two dozen of the patients he abused.

However, Riems pleaded not guilty to the charges of gross sexual imposition and rape despite his admissions of abuse and is currently housed in a Lake Erie city jail that is located somewhere between Cleveland and Toledo. The exact location is not being disclosed. 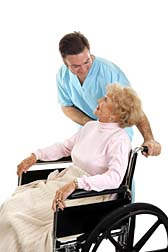 So far, Authorities have found 14 patients who were abused and are looking into the possibility that there were 10 more assaults that were committed by Riems while employed at the nursing home. As for the lawsuit filed in Erie County Common Please Court by the family who alleges Riems abused their father, they are seeking damages in the amount of $175,000. Also listed as a defendant in the case is Concord Care and Rehabilitation Center, the nursing home in which the incidents supposedly occurred.

The attorney for the family states that the nursing home should have had knowledge of the abuse occurring within their walls and that they were negligent when they hired Riems by not obviously performing the correct hiring procedures. The attorney further states that Riems had a history of past patient abuse before Concord hired him and that if Concord had done the necessary background checks and research on Riems, they would have discovered these incidents of past abuse. He states that Riems's history was "easily discoverable." He is dumbfounded at the fact the abusive behavior occurred for years and years and that no one within Concord acknowledges that there were any indications that patient abuse may have been occurring within the facility.

As for comments from Concord Health, chief executive Debra ifft declined to make any comments.

Riems admitted to police that his abusive pattern began not long after he began his career in 1985 and that during the course of his career he has worked at 13 different nursing homes and hospitals. This means he has worked at all but one in the northern part of Ohio.

More News
The family who has filed the lawsuit states that their father has been a resident of the nursing home since 2005 and that he has suffered emotional and physical injuries that are quite severe.

Unfortunately, nursing home abuse has become increasingly prevalent and more and more cases are being tried in courtrooms all over the United States. There are now lawyers specializing in such litigation and many groups working to deter nursing home abuse. That makes the case of Riems allegedly abusing nursing home residents news that is not new to many.

As for the family suing Riems on behalf of their father, Murray states that all the family wants is answers and that they want to do what they can to ensure that such abuse does not happen to the families of others. Hopefully such a lawsuit in addition to the jail time involved will make a nursing home employee think twice before abusing a nursing home resident in any way.