A surveillance camera captured images of nursing home abuse in what has been deemed the second-worst elder care facility in the nation, according to the US Government Accountability Office (GAO). 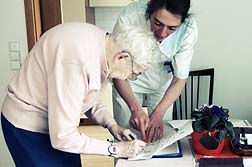 Richmond Health and Rehabilitation Complex in Madison, also known as Madison Manor, was also ranked the worst facility in the state of Kentucky.

Last year a hidden camera at the Richmond facility caught images of abuse inflicted on an 84-year-old resident by nursing aides. The resident, Armeda Thomas, has since died. However, in September of last year, Thomas' family hid a video camera in her room at Madison Manor in an effort to explain bruising on the resident's body.

Officials at two other nursing homes ranked sub-par by the GAO continue to stand behind their facilities. Britthaven of Somerset underwent two inspections in the past 12 months and was cited only for minor deficiencies, according to Brian K. Jaggers, the administrator of Britthaven. He added Britthaven is currently in compliance with all state and federal regulations.

Meanwhile, Villaspring spokesperson Kim Majick said officials there are "working very hard" to meet the needs of its residents. "Although our state survey results prior to 2008 were not above average, we are very proud of the facility that we have today."

Officials at Extendicare, which owns Madison Manor, have said the facility is now in substantial compliance with regulations.