Christina developed heartburn after her first child was born and says she took Nexium religiously for about five years. She remembers the date of her first Nexium fracture: it was July 4th and she could see fireworks from the hospital.
“I just tripped and fell but broke my ankle in three places,” Christina says. 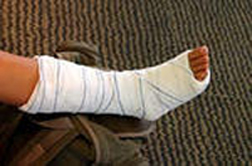 Christina never experienced any bone issues, and there isn’t any osteoporosis in her family so this accident was quite a shock. Sure, she’d had a few broken bones in her life but that was due to a car accident. “My broken ankle required three surgeries - they had to insert metal plates and screws,” she says. “The break was so severe that it was alarming; needless to say, I had a bone density test at the time but it came back normal.”

To make matters worse, Christina developed kidney stones - her doctor said it was likely due to being sedentary. And having to sit for so long was particularly difficult for a mother with a five-year-old.

Fast-forward four years to 2012. Christina is still taking Nexium. “I was just moving some pieces of wood in the back yard when I lost my footing and fell on my side,” she explains. “I didn’t think anything was broken but my elbow hurt quite badly and it was slightly swollen. I had no strength - I couldn’t even hold a coffee cup. My husband said he could see a faint bruise so I figured it wasn’t broken and it would just heal by itself.

“A few months later my elbow was still hurting and my strength hadn’t returned so I had a few x-rays. Sure enough, a bone at the top of my elbow was broken.”

Christina was worried: she was only in her late 40s - too young to break bones in a slight fall. She had another bone density test, with the same results. She saw a specialist but still had no answers, until a friend told her about Nexium bone fractures.

“After my friend told me about Nexium side effects, mainly bone fractures and breaks, I did some research online and the light bulb went on,” says Christina. “I had mixed feelings: on one hand I felt relieved that I finally knew why I suffered these injuries, but on the other hand I was frustrated with the whole medical system - from the drugmaker to the government and FDA to my doctor. I don’t know how a medication like Nexium can get approved and still be on the market when it is causing so much serious damage. It really is frightening and I try not to spend a lot of time thinking about it.

“Actually I stopped taking Nexium a few years ago, before my friend told me and before my ‘light bulb moment’ because it got to be too expensive. Nonetheless, I would have stopped it even if it was free knowing what it can do.

“My heartburn never came back so I don’t know whether it even helped. Now I am very cautious and afraid of permanent damage to my bones. I am disgusted with how the drugmaker advertises Nexium because I was never warned about fractures. And knowing how much money they make, just adds insult to injury. I hope my claim isn’t too late to join a Nexium lawsuit.”

It’s no wonder that Christina is frustrated with the FDA. So too is Public Citizen, a non-profit consumer advocacy organization. In 2011, Public Citizen petitioned the FDA to add “black box” warnings for four serious adverse events and additional safety information to all proton pump inhibitors (PPI) product labeling. Nexium is a PPI.

More NEXIUM USE AND INCREASED RISK FOR FRACTURE News
Last month the organization filed a lawsuit against the FDA demanding strong warnings about PPIs and Nexium is at the top of its list. It seeks a ruling from the U.S. District Court of the District of Columbia that the FDA unlawfully withheld action, and calls for an order for the FDA to act within 30 days.

In 2010, the FDA revised labeling requirements to include fractures after evidence showed that PPIs increase the risk of severe side effects such as hip fractures, life-threatening cardiac arrhythmias and C. difficile infections. And in 2009, a study in Gastroenterology found that Nexium and other PPIs could actually cause acid reflux - the problem it was meant to treat. Public Citizen argues that current warnings for all the risks are not displayed prominently.


READ ABOUT NEXIUM USE AND INCREASED RISK FOR FRACTURE LAWSUITS