Richard had never broken or fractured a bone in his 87 years, until he took Nexium. “It was more like a soft fall, but x-rays showed that I fractured my hip and that really surprised me, until I found out about Nexium fracture risk,” he says. 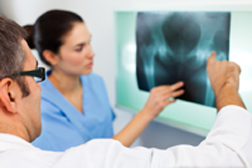 Richard says he was on Nexium for about five years and took three doses a day. “Because my doctor prescribed it, I didn’t ask any questions, and certainly didn’t ask about Nexium side effects but maybe I should have,” he adds. “My pharmacist always tells me about any new drug but he didn’t mention fracture risk either. I had no idea about fractures or breaks associated with this med until I read about it online - and I was shocked.”

Richard’s shocked reaction is common - most Nexium consumers have no idea that a supposedly harmless medication to treat acid-reflux can cause serious damage such as hip fractures. And of course they trust their doctors.

Of course someone Richard’s age could suffer a fractured bone regardless of taking a medication like Nexium, but it appears that age has no barrier. Steve is about 40 years younger than Richard and suffered Nexium side effects soon after taking the drug.

“I suffered my first muscular-skeletal problem about a year after I began taking Nexium,” Steve says. “Soon afterward more muscle-skeletal abnormalities began to occur. At the beginning, I didn’t know what to make of my health issues. I had problems swallowing; I had back and knee pains; and a strange overall pain running the length of my back. The bone fractures were the most puzzling - my wrist and foot - because they appeared suddenly without any cause.”

Steve’s doctor couldn’t explain the x-ray results. How could he suffer a fracture without having an injury? Steve says he didn’t so much as bump his wrist or twist his foot; he certainly didn’t take a tumble. Like Richard, he found out online that Nexium could be the culprit. He stopped taking Nexium immediately and within a few days some of his pain began to disappear. Still, Steve is concerned that he may have suffered irreparable bone damage.

More NEXIUM USE AND INCREASED RISK FOR FRACTURE News
When Richard told his doctor about his Nexium discovery, his dosage was decreased from three pills per day to one. But Richard took his health issues into his own hands this time and stopped taking Nexium completely.

“I stopped taking Nexium early this year and haven’t had any problems since,” he says. “And I haven’t had any acid-reflux problems either so what was even the point in taking it? I find it incredible that a drug could do something like this. I thought very highly of Nexium, especially because my doctor prescribed it, but now I know better to take something without doing some research first.”

Richard’s hip is fine now. He went through a lot of physiotherapy and had to use a walker but he has graduated to a cane. However, he is worried that Nexium could still cause another fracture. And that is why Steve and Richard have filed Nexium claims.

Posted by
linda
on May 4, 2014
shoulder fracture from fall after i took nexium