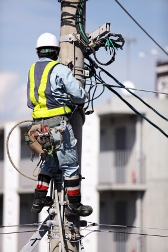 The harassment lawsuit was filed by the Equal Employment Opportunity Commission against Sparks Steak House, which was accused of not stopping the harassment despite receiving complaints from employees. According to Associated Press (11/15/12), the manager was accused of groping 22 male employees over an eight-year time frame. In addition to groping employees, the manager was accused of making sexual comments and attempting to grab employees' genitals. Sparks has agreed to pay $600,000 to settle the lawsuit, which included allegations that some employees were retaliated against for complaining about the harassment.

The steakhouse has not admitted to wrongdoing. A spokesperson for the restaurant said the lawsuit was settled to avoid legal costs. In addition to the $600,000, the steakhouse must also establish a hotline for employees to report discrimination and must further amend policies regarding harassment to prohibit both harassment and retaliation.

More NEW YORK LABOR LAW News
Meanwhile a gender discrimination lawsuit has been filed in Manhattan against the NBA. The lawsuit alleges the plaintiff and two other women faced a hostile work environment because they are mothers. According to the lawsuit, the plaintiff worked for the NBA for 10 years, but when she attempted to return from maternity leave, faced a change in hours that required her to work evenings when there was no need to. The plaintiff alleges she left her position because she could not afford childcare for the late hours.

And a New York overtime lawsuit has been filed against National Grid, a supplier of natural gas and power. According to CBS New York (11/17/12), employees of National Grid say they have not received overtime pay for working up to 16 hours on shifts following href=” https://www.lawyersandsettlements.com/lawsuit/hurricane-sandy.html”>Hurricane Sandy. Plaintiffs say they worked up to 80 hours in the weeks after Hurricane Sandy but were only paid for 40-hour weeks.