The largest operator of casinos in Las Vegas, Nevada has been formally called to the carpet for allegedly violating employee's rights and freedoms to recruit fellow employees with the idea of unionizing. The Nevada labor ruling was initially handed down in June but formalized by the National Labor Relations Board (NLRB) October 2. 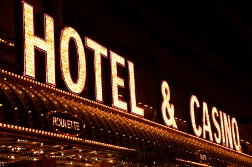 According to the Las Vegas Sun (10/2/12), Station Casinos will be required to end any alleged intimidation of employees attempting to solicit other employees to that end, and is required to post notices throughout their casinos. In the Nevada labor dispute, the Culinary Union initially filed more than 400 charges. That number got whittled down to the 82 charges the NLRB eventually heard, and ruled upon.

"Today's findings by the NLRB are by no means a 'verdict,' as touted by the Culinary Union," said Station spokeswoman Lori Nelson in a statement. "Rather it requires our company to remedy the situation by posting a 'Notice to Employees.'"

The notice, among other requirements, reiterates that workers under federal law have the right and freedom to recruit, form, join or assist in union organizing activities. The notice must also state that Station will refrain from participating in any practice or behavior seen as threatening, and will not issue or threaten reprisal for such activity.

"We will not threaten employees by inviting them to quit their employment because they support the union," the notices are required to state. "We will not promise increased benefits and /or improved terms and conditions of employment to dissuade them from supporting the union."

According to the Nevada Labor Law ruling, Station was found to have engaged in reprisal activity ranging from the barring of employees at its Red Rock Resort from wearing union buttons, to barring discussion of issues of 'common concern' during pre-shift employee meetings. The latter was an issue at Station's Palace Station facility.

A supervisor at Fiesta Henderson was accused of surveillance by following a pro-union worker during her shift, and barring her from speaking to other employees.

More NEVADA EMPLOYEE LAWSUITS News
While the Culinary Union has not been successful in organizing any of the Station-owned casinos, it nonetheless praised the ruling. "This is a tremendous victory for all workers at Stations. We hope this decision will lead to a fair process to decide whether to have union representation without management interference and intimidation."

Station was required to rehire two individuals the NLRB ruled were unlawfully terminated due to their pro-union activities. While the two individuals had already been rehired, according to records submitted by Station Casinos, the NLRB nonetheless ordered the employer to issue back pay to the two affected employees. Station was also directed to 'make whole' a third employee who allegedly lost work opportunities in the matter.

The final basket of 82 charges was arrived at in September of last year. The final ruling by the NLRB in the Nevada Labor dispute came down 13 months later.