It's an employment issue that not only has everyone in the Nevada casino industry sitting up and taking notice, but pretty much everyone in the hospitality industry there. Everyone from servers in family restaurants, to the dealers and their supervisors on the casino floor are anxiously watching how the Wynn Las Vegas issue plays out. 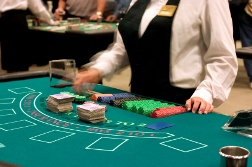 As lawsuits go, this is a dandy.

As summarized in the Las Vegas Sun (7/27/12), dealers employed in Nevada casinos are some of the best-paid casino workers around, given their access to tips from well-heeled customers. According to the Sun, if they shared their tips at all, the dealers shared amongst themselves. Such generous tip income resulted in dealers taking home some of the larger pay packets, with some dealers making more than their supervisors, once tip income was factored in.

That all changed at Wynn Las Vegas when owner Steve Wynn decided, in 2006, to begin including managers in the dealer tipping pool. As a result—a first for the casino industry—dealers were required to share their tips with their supervisors.

With the change to employment tipping, Wynn had his reasons: bringing supervisors into the tipping pool would foster increased customer service amongst supervisors, according to the report. And with the potential for supervisors to make additional coin from tips, it would be easier to recruit new supervisors from the dealer pool.

Unhappy with the change, dealers at Wynn Las Vegas took the unprecedented step of joining the Transport Workers Union (TWU), not to mention filing a complaint with the labor commissioner's office of Nevada. The latter upheld Wynn's right to expand the tipping pool to casino managers.

However, an employment lawsuit challenging the labor commissioner's ruling resulted in a reversal of that decision based, according to a finding by Clark County District Court Judge Kenneth Cory, on state law that prevents employers from benefitting through the sharing of tips, and the requirement thereof.

Judge Cory's position, based on state law, holds that by requiring dealers to share tips with casino managers, the owner in sum is using those tips to partially fund higher salaries for Wynn Las Vegas managers.

That Nevada employment ruling has been appealed to the Nevada Supreme Court. Complicating the issue even further is an opposition position taken against the dealers by the Culinary Workers Union, which fears a victory by the dealers would put into jeopardy existing agreements state-wide governing the sharing of tips between workers and supervisors.

It should be noted that the TWU is not a party in the Supreme Court lawsuit. While the TWU represents the dealers at Wynn Las Vegas, it is not a participant in the lawsuit per se.

More NEVADA EMPLOYMENT News
Judge Cory's ruling, if upheld, "could preclude employers from requiring servers to share tips with bartenders, bus persons or dishwashers," a proposed brief from the Nevada Resort Association and the Nevada Restaurant Association, published in the Sun, states. The ruling "raises important policy issues about whether courts should interfere with legitimate business decisions and, in doing so, discourage companies from engaging in creative methods for improving customer service, employment satisfaction or employment compensation."

The Culinary and Bartenders unions, which are considered quite powerful, represent more than 60,000 workers in the state of Nevada. Given that the state hosts so many enterprises in the hospitality and service industry, it's not surprising this Nevada employment legal battle has everyone watching very closely.

If you or a loved one have suffered losses in a similar case, please click the link below and your complaint will be sent to an Nevada employment law lawyer who may evaluate your claim at no cost or obligation.
Request Legal Help Now

Posted by
Theodor
on February 27, 2016
The players always see in the supervisors of the game or floor persons a third party and very often the players see them as e negative role in gaming luck. So when a player tips a dealer he tips the dealer for his service and accurate dealing of the game. The floor persons are paid $150- $250 per day guarantied on other side the dealers have minimum pay per hour $8.25 or lower if they make tips they make it cause of good service and good job and this is not guarantied. As the supervisor shall control the game and procedure the dealer is the person who is making the players experience to be pleasant and enjoyable even most of the times they loosing money they still tipping.There is conflict of interest when somebody who shall monitor the game share the tips from the game it is like the judges share the lawyers retainers. Not to mention that in Wynn situation the dealer have no control over the counting of the tip money and they have no idea how much they made this day it is whatever the casino counting say. This is a big change as the dealers alway had 3 persons from there own who counted the tips money in special room under surveillance cameras recording the process of counting. This problem rase one more issue what if the counting is no good or the people doing the counting stealing one chip of $500 is small and very ease to bi stolen. Not to mention that the people who make the tips do not count the tips money and very possible that the counting is deceptive. ho knows how much money the dealers make in reality what is the guaranties that this is correct count and why the dealers have not representatives in the count.Lets imagine this situation I am the owner of a casino business and the tips pools are the same as Wynn casinos. If I say to the counting the tips people every time to get 10% from the tips money who will know that this happening Me and the 2 persons counting the tips money. How you would call this? This is stolen money and hidden income money under the table, money you would not pay taxes for,