Police Battle the State of Nevada over Pay for Union Activities 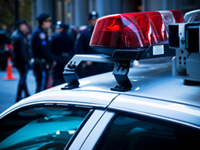 Las Vegas, NV: An interesting battle is heating up on the Nevada Labor Law front that has flown under the radar, but is nonetheless compelling when one looks at the relationship between tax dollars, public servants and unions. To that end, a Nevada Employment lawsuit has been filed in federal court by three police unions taking issue with new legislation that directly affects compensation for union activity.
Read [ Police Battle the State of Nevada over Pay for Union Activities ]

A former employee of an Applebee’s restaurant in Nevada who had her Nevada employment sexual harassment lawsuit tossed due to problems with the timing involved with the filing of her complaint will have her day in court after all, following the decision of an appellate panel. Last week the Ninth Circuit ruled that Maria Escobedo had indeed filed her complaint within the mandated time limits, and that a judge had erred when he forced the plaintiff to pay a filing fee.
Read [ Nevada Employment Plaintiff Wins Appeal, Lawsuit Can Continue ]

We have been watching, both prior to the US Presidential election and the aftermath, the discord between the Republicans and the Democrats. The gridlock extends to judicial appointments. The result is scores of vacancies on judicial benches across the country, and this is most evident in the state of Nevada where there are no fewer than three active vacancies in Nevada district courts. Judges who have retired are available to be called in as needed, but that can’t last forever. Last year, in Nevada, a brief judicial emergency was declared. What does all this have to do with Nevada overtime pay laws?
Read [ Will Judicial Shortage Shortchange Nevada Overtime Laws? ]

In deference to the popular adage 'what happens in Vegas, stays in Vegas,' Nevada employment and labor violations against employees who work in the service industry in Nevada can come back to haunt an employer.
Read [ Sexual Harassment Lands Nevada Employer in Hot Water ]

The largest operator of casinos in Las Vegas, Nevada has been formally called to the carpet for allegedly violating employee's rights and freedoms to recruit fellow employees with the idea of unionizing. The Nevada labor ruling was initially handed down in June but formalized by the National Labor Relations Board (NLRB) October 2.
Read [ Victory for Union Activists in Nevada Labor Dispute ]

Las Vegas might be the place travelers go to win big, but according to some Nevada employment lawsuits, employees are having trouble getting money they're entitled to. Federal law and Nevada employment law protect the rights of employees working in Nevada establishments. But some Nevada employee lawsuits allege their employers do not even classify them as employees, resulting in them missing out on wages and benefits that are rightfully theirs.
Read [ Nevada Employment Lawsuits ]

It's an employment issue that not only has everyone in the Nevada casino industry sitting up and taking notice, but pretty much everyone in the hospitality industry there. Everyone from servers in family restaurants, to the dealers and their supervisors on the casino floor are anxiously watching how the Wynn Las Vegas issue plays out.
Read [ Nevada Casino Tipping Battle an Employment Issue Worth Watching ]